This is the moment of the year where a new release of Ubuntu will be made available.  Ubuntu 14.10 will be released on October 28h 2014 and we already released the traditional post about how to perform a fresh install.  So, it’s time to check if the xrdp package combined with the Unity desktop is working or not.

If you follow me, you know that we have already explained how to configure xrdp software using different versions of Ubuntu.  If you didn’t know about that,  you can have a look at the following posts :

We have also explained how you could reconnect to an existing session, using different methods

Since Ubuntu 12.10, Unity-2d desktop environment does not exists anymore.  Since then, you cannot remotely connect to your Unity Desktop using either vnc solution or xrdp solution.  To have xrdp working against a recent version of ubuntu, you need to install a alternate  desktop interface.   We have already described how to install these desktops and have them working in conjunction with xrdp.  Check these posts

As you can see, we have posted quite a lot of information regardint xrdp and Ubuntu.  So, in this post, we will perform a standard installation of xrdp and see if Ubuntu 14.10 can still be accessed remotely from a Windows machine

In this post, we will be installing the standard xrdp package from the Ubuntu Repository. In order to perform the installation of the xrdp package, you will login into your ubuntu 14.10 machine.

Using the Dash button, in the search box, type Terminal 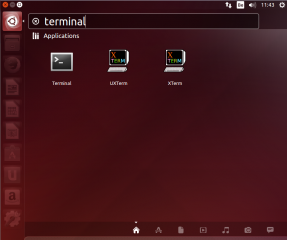 Click on the terminal icon and the Terminal console will open

In the Terminal, type the following command

You will be then informed about the package size. To proceed with the installation, press Y 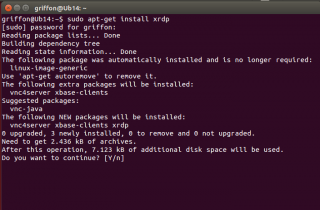 When done, you need to install an alternate desktop environment. So, let ‘s move to the next section….

Choose your alternate Desktop Environment to be used with xRDP

Now that you have installed the xrdp package, you need to install the alternate desktop to be used during remote session.  As mentioned earlier, you can select from different Desktop Environment.  We will describe here after the installation process of some of them.

The xfce desktop is the de facto desktop that’s installed when people want to use xrdp on ubuntu.  Xfce is a light   desktop interface and work ok with xrdp.  However, the xfce interface is a little bit too old and aged to compete with other desktop available out there.  If you would like to use the xfce desktop in conjunction with xrdp  from a terminal session, type the following command 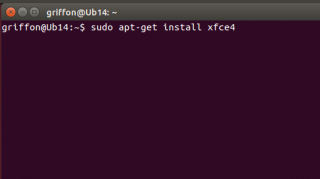 You might be prompted for a password.Enter the password and press enter . You will be then informed about the package size. To proceed with the installation, press Y

The LXDE desktop is also a quite standard desktop interface and quite lite. Compared to xfce interface, the lxde has  a more modern look n feel.  If you would like to use the lxde desktop while connecting via xrdp, you can perform the following actions

Mate Desktop is gaining some attention since this desktop is the most approching version of not-working-anymore     gnome 2 under Ubuntu.  This desktop interface is really working well and provide a known interface to users who had   experience with gnome 2 interfaces.  If you would like to use the mate desktop in conjunction with xrdp  from a terminal session, type the following command

There is a new Mate-desktop package (1.8.1) available directly from ubuntu repository.  We did not install this one because we have encountered a small issue after the installation.  The Unity greeter is replaced by the Mate-desktop greeter.  If I have to choose between Unity and Mate-destkop greeter, I think that the unity greeter has a better look n feel than the other one.

If you would like to try the  Ubuntu Remix MATE 1.8.1, you can issue the following command

Configure xrdp to use your desktop environment

At this stage, you have normally installed your preferred desktop (can be xfce,mate or lxde). Now, you have to tell xrdp that it needs to use this desktop while performing your remote desktop connection.  One way to configure your system is to create and update the .xsession file.

If you have multiple users on the system that needs to connect, you will need to configure the xsession file for each user !   (or you can update the startwm.sh file to automate the process – this is the topic of a near to come post)

In order to configure your xsession file (based on your preferred Desktop), you will need to execute the following operations

At this stage, you should have a basic xrdp working solution. When I say basic, I mean that you can indeed connect to your remote Ubuntu machine but if you disconnect your session and try to connect again, you will each time open a new session.

Go to your windows machine, start remote Desktop client and enter the ip address/name of your ubuntu machine 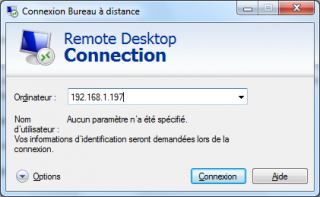 You should see then the login screen of xrdp presented to you. Note that, at this screen (and because we have not configured keyboard layout yet), the keyboard layout is set to English by default. 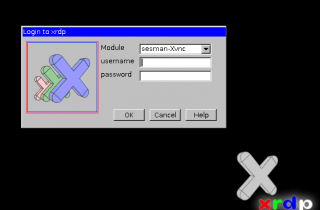 Note : Ensure that in the module drop down box, you have selected the option sesman-Xvnc if you want to have a working xrdp session.

You will see a dialog box showing the login process 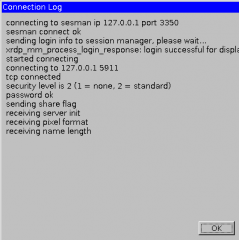 If everything is configured correctly,you should see your desktop loading and you should be able to perform your work through this desktop environment. 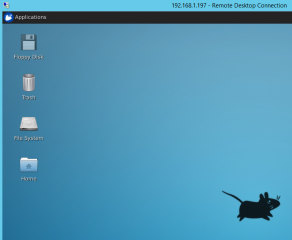 mate desktop via xRDP (my favourite)

Configure your Keyboard layout at the xrdp Login screen

As explained above, with no special configuration, the xrdp login screen keyboard layout is set to english by default.  if you need to change it to another keyboard layout, you should proceed with the following actions

Reconnect to the same session

In the ubuntu 14.10 final release, the xrdp package has been updated and it seems that you do not need to configure anything else in order to reconnect to your session.  The package has been fixed.  So, now after you have performed your installation, and after configured your xrdp keyboard layout correctly,  you should be able to connect to the xrdp server. If you disconnect and reconnect again, you should see your running session available.  Cool ! Finally somebody has fix this !

We have not checked yet if on  Ubuntu 14.04, if you update the xrdp package you can end up with the same result (but we assuming so)….

We have spoken about this subject in the past.  If you search on our blog, you will find different ways to achieve that.  The best way consist of performing a custom installation and use x11VNC software. (see this post http://c-nergy.be/blog/?p=5439)

Another way consist of modifying some configuration files. This method might be the preferred one by some users because you can still use the xrdp package from Ubuntu repository and being able to reconnect to the same session. Check this post http://c-nergy.be/blog/?p=5382  – Section how to reconnect to existing session )

This post is becoming serioulsy long so we will stop here and come back on some additional configuration you might want to perform.

As you can see the process has not changed that much when using xrdp and remote desktop client tool. The processes described for ubuntu 14.04 are still applicable for ubunt 14.10.  So, if you are used to install and configure xrdp with Ubuntu, this version should not be a problem for you.