In our previous posts (see here, here and here) ,about PXE technology and how to deploy Ubuntu machine through the network, we have seen that since the introduction of UEFI technology and secure boot, the process has changed a little bit and there is a need to combined technologies in order to be able to deploy Ubuntu operating system.  It seems that the standard and well accepted approach is to combine pxelinux technology for BIOS-Based systems and to use grub boot loader for UEFI-Based systems.

Technically, it’s possible to use only PXELinux solution in order to Deploy operating systems to BIOS or UEFI based systems.  However, some significant limitations exists.  These limitations are

On the other hand, it’s seems also possible to get rid of pxelinux technology completely and replace it with the grub technology.  Grub solution can be used to deploy Operating systems on BIOS and UEFI based systems.  The advantage of Grub is that all the necessary files have been signed and can be used when secure boot option has been enabled. In some future posts (maybe), just for the challenge, we might provide guidance on how to setup a PXE Server using only PXELinux technology and/or using only grub technology.

In this post (or series of posts), we will provide again a kind of step by step guide in order to setup a PXE Server that can serve at the same time BIOS or UEFI Based systems… It’s should be quite straight forward as most of the aspects have been already discussed in some previous posts.

This guide will explain how to configure your dhcp/pxe/tftp server infrastructure to support BIOS and UEFI-based systems network installation.  This guide will mix PXELinux and grub technology.  This combination seems the one that provides the best results when there is a need to deploy operating systems on UEFI or BIOS based systems.   Because grub files are signed, this setup will also support UEFI and secure boot option enabled as well

To deploy Ubuntu operating system through the network, necessary infrastructure and server services needs to be present on the network.  DHCP, DNS, TFTP, Web and File services are needed in order to build up the needed PXE infrastructure.

In this post, we will be using Ubuntu 18.04.2 Server as the PXE server.  Ubuntu 18.04.2 has been selected because this is a Long Term Service (LTS) release. This post will not explain how to install an Ubuntu server.  When your installation is completed, move to the next step

Step 1 – Set a Static IP address on your Ubuntu Server

Ubuntu Server has no Desktop interface available by default.  We will need to perform most of the actions through command lines.  No fear, you will see it’s quite easy actually.  To set a static ip address on your Ubuntu Server, you will need to edit the following file  /etc/netplan/50-cloud-init.yaml.

To edit this file, issue the following command

In order to apply the changes, we need to execute this command as well

Finally, check that the ip address has been set correctly by issuing the following command

Step 2 – Build up your PXE Server

In this post, we assume that the Ubuntu Server will be hosting all the necessary services needed to implement a proper PXE Infrastructure. To setup a pxe infra, we need to install the following packages

To create this structure, you will need to execute the following commands

Because you are using the Apache Web server, we will be copying all sources files under /var/www/html directory.  We will copy the iso files contents of Ubuntu 18.04 Desktop and Ubuntu Server under this location. We will create the following structure first

So, mount your iso file into your Ubuntu server.  To mount it, issue the following command

Insert at the bottom of the file, the path where you have stored your installation files, which subnet can access it and which kind of right you want to grant.  In our  scenario, we want to grant access to the following directory /var/www/html/bionic/desktop through the network subnet 192.168.1.0/24 and we are granting read only access (ro).  So, at the end of the file, we would add the following line

We are almost ready !  Now, we need to get the necessary file placed in your tftp folder in order to have pxe capability.

We will also need to create the folder called pxelinux.cfg under the /tftp/bios folder. Inside this folder, we will create an empty file called default.  This file control the pxelinux behavior. We will populate it with the following code

In this step, we need to place the correct bootloader in order for the installation process to start accordingly.  Under the /tftp/boot folder, we will create 2 sub folders to make a distinction between the server and the desktop bootloader files. So the folder structure will look like the following

Finally, we need to populate the grub folder. This folder contains the files that are needed to boot uefi systems.  So, in your system, you will execute the following commands. The commands below basically will download the necessary signed bootloader files and grub files needed by PXE server and extract the contents on their dedicated folders (shim and grub)

We are almost done !  Now, we need to create also a boot menu and get the proper option available and working.  The grub boot loader reads information from the grub.cfg file.  If you have followed this step by step guide, the content of the grub.cfg file should look like this

This is the fun part ! If everything is working as expected, when you boot your Bios client, you should see the pxelinux boot loader showing up.  As you can see on the screenshot below, we have customized a little bit the look’n feel of the boot menu in order to match to the grub boot menu. 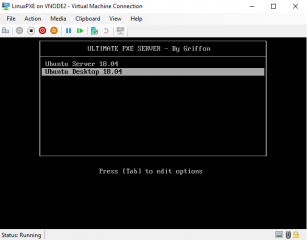 Doing the same for UEFI computers, you should see a boot menu similar to the following.. 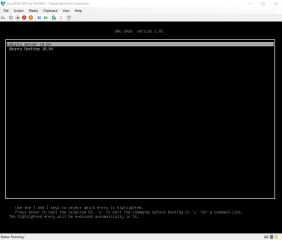 This is it for this post !  We have provided here a step by step guide in order to setup a PXE server on an Ubuntu Server.  This installation guide provides a lot of information and could be used in a bunch of scenarios.  Our implementation offers the following benefits

We might not have finished our investigations around PXE, PXELinux and Grub solutions.  In a future post, we might want to provide some guidances on how to build a PXE server using only PxELInux files or using only Grub Files