Today, we continue our journey through the Ubuntu flavors and the most useful tool to perform remote desktop sessions to Ubuntu machines i.e. xRDP.  One of the frequent request we receive is how to have xRDP working against a Kubuntu operating system.

In one of our previous posts, we have been demonstrating that it was indeed possible to connect through xRDP to a Kubuntu desktop interface.  Since Ubuntu 16.10 (and other Ubuntu flavors) ship with the latest version of xRDP (0.9.0), which brings many features and improvements, the process of having xRDP installed and working with a Kubuntu machine is far more easy than in the past.  The magic lies in the new xrdp rdp driver developped by the xRDP team which replaces the need to install a VNC Server software package.

Ubuntu 16.10 + xRDP 0.9.0 really brings a standard way to install configure and use remote desktop session to Linux world.  So, it’s time to show how easy the process has become

As mentioned earlier, the installation process of xRDP is becoming easy and follow the standard process of installing any ubuntu packages. To have the xrdp package installed, you simply open a Terminal Console and you issue the following command 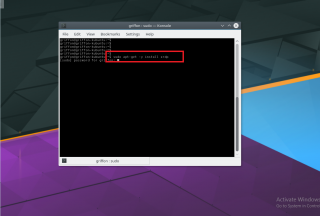 You can see that the version of xRDP package is set to 0.9.0 (as on the screenshot), we can proceed to the next step 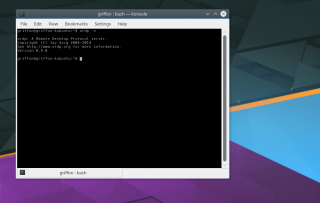 Actually, if we are running Kubuntu as Operating system and we want to connect to Kubuntu Desktop; there is no need to make any modification to the xrdp configuration file.   the /etc/xrdp/startwm.sh will try to detect automatically your Kubuntu desktop while performing your remote desktop connection. 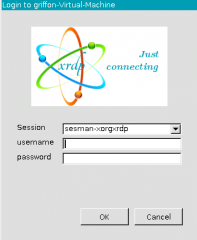 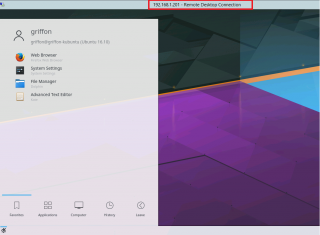 Voila ! It’s that simple nowadays.  Using xrdp package version 0.9.0 makes it really easy to setup remote desktop connection capabilities on a Linux machine.  We do not need to change xrdp config file in order to connect to desktop environment in the remote session.

Because xRDP 0.9.0 provides its own xrdp server, there is no need to select, install and configure complex VNC server package. The final thing that xRDP 0.9.0 brings to any Ubuntu flavors is the drive redirection feature out of the box.  In the past, there was a need to compile xRDP from source to get this option available.  I think we were one of the first on the web to demonstrate this capability (see Teaser and step by step process ) on Ubuntu 16.04.

The only thing with Kubuntu desktop (compared to other distros) is that the drive redirection is not obvious or visible immediately.  Indeed, you have to go to your home folders (in Dolphin) and make visible hidden files (Alt +.) When this is done, you would see the .thinclient_drives folder which will show you the redirected drives available within your remote session… 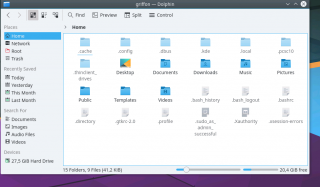 This is it for this post !  So far, we have been installing xRDP on the following distributions or Ubuntu Flavors

We do not know yet what would be the topic of the next post…..Wait and see