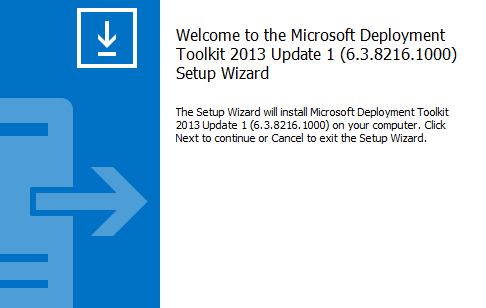 Based on the information available at this location http://blogs.technet.com/b/msdeployment/archive/2015/08/17/mdt-2013-update-1-now-available.aspx, the final version of MDT 2013 Update is available and can be downloaded at the Microsoft Download Center.

If you want to download and install MDT 2013 Update 1,  You will need to

In this version, when you open the Deployment workbench, you will notice that the component node has been totally removed. In previous version of MDT, the component nodes was used to check and download all the necessary components (and more) in order to perform a proper deployment.  Since everything is available in the Windows ADK package, it seems quite logical to have removed this node from the console which was causing more issues than helping people…

In our previous post about MDT 2013 Update 1 preview, we have quickly talked about the WICD ( Windows Imaging and Configuration Designer).  We didn’t got the time to really look into it.  It seems to be the replacement of the Windows System manager that was used to create Unattend file that could be used to automate the deployment.  Ready about the WICD and windows 10 deployment in general, we start understanding the goal and possible benefit of the tool.

In the past, during deployment project or upgrade projects, we had basically two main choices : Fresh install or Upgrade.  With hardware refresh scenario, the fresh install is the preferred method.  Using the new WICD tool, we could basically reduce the provisioning process of new computers by simply applying our desired configuration settings.

Indeed, when you deploy new hardware, they already come with Operating system installed.  So, in the past, you would wipe this os and install your Enterprise baseline.  With the WICD Tool, you could create a config file that would add or remove components from existing os and convert this computer with already installed OS into an enterprise workstation that would meet your organization requirements. 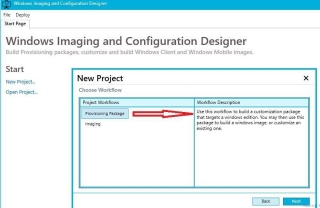 Again, we didn’t really play with the tool so we can say if this is really a possible approach or not.  And maybe your company would still prefer to wipe completely the operating system provided by an external company and ensure that proper OS customization and settings are applied from the Corporate baseline…

Even if you can download the final version of the tool; there are apparently still some issues and limitations while using the MDT solution.  You can review all of them at the following location :

If you go through the list, you will notice that they quite a lot of known issues with this version. We are expecting to see a new release of MDT 2013 Update 1 in order to fix most of these issues.  So, if you are planning to install and use this version, be aware of all these known issues….

If you are planning to upgrade your MDT infrastructure to MDT 2013 Update 1, we are assuming that you are planning to deploy windows 10 (or at least test deployment activities).  Do not forget to import the ADMX templates for Windows 10 in your domain, in order to create the appropriate gpos for Windows 10 and being able to automate as much as possible your deployment activities by ensuring that the user settings are applied through your domain infrastructure.

You can download these ADMX for Windows 10 at this location :

This is it for this post.  As you can see, we are starting slowing to get into the new Windows 10 Operating System and the deployment process that could be used.  We are focusing on MDT technology because it offers an way to create an independent deployment infrastructure (i.e. no dependencies on Active Directory for example) but note that SCCM 2012 R2 also include support for Windows 10 deployment. So, if you have SCCM deployed in your organization, you can also start playing around with the Windows 10 Deployment process.  If I remember correctly, you would simply need to install ADK 10 to have support for Windows 10.

During the coming months, we will be working more and more with these new OS and news tools and we will share our findings