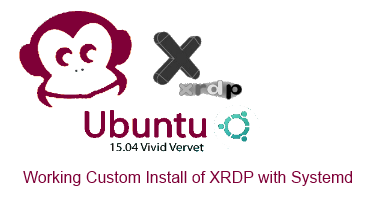 However, in our previous post, we have quickly described a workaround in order to have xrdp software working if you have performed a custom installation.  The workaround is quite simple. You simply need to delete the xrdp.service and xrdp-sesman.service file used by the systemd software and you should be able to connect again to your ubuntu machine via XRDP.

In this post, given that Ubuntu 15.04 is now using Systemd solution, we have decided to update the install-xrdp.sh script.  Using this script, you will be able to perform a custom installation and have xrdp running perfectly fine.  Moreover, we have updated the xrdp.service and xrdp-sesman.service Units files used by systemd in order for to have the xrdp service managed and controlled properly by systemd.

Why a custom installation ?

If you want to understand what the script does, you can have a look at this location (Ubuntu 14.04 – Perform a custom XRDP Install (using X11VNC). We have updated the script to take into account the introduction of systemd component in Ubuntu 15.04.   In this updated version of the script, we are modifying the xrdp.service and xrdp-sesman service so they reflect the correct path of the executable files for the xrdp service.

In this script, we are installing the MATE-Desktop which is our favourite desktop environment.  If you want to use another, you will have to update the script provided hereafter

If you copy/paste the script, you might encounter some issues because font formatting might be not maintained during the copy/paste operation. Please ensure that format is  accurate before launching the script.

Disclaimer : As usual, use this at your own risk !!

#Install the desktop of you choice – I’m Using Mate Desktop

cd xrdp-master
# needed because libtool not found in Ubuntu 15.04
# Need to use libtoolize

Set Execute rights on the script

You can copy/paste the script into a text file in your home directory and save it as xrdp-install.sh.  In order to be able to run this script, you will need to make the script executable.  Right-click on the file, go to properties, then select permissions and tick the box allow executable…. 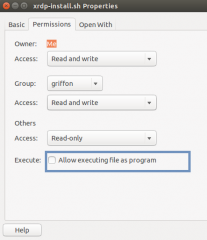 or you can use the command line to perform the same action. Open your Terminal console and issue the following command

(if the file is located in your home directory in the Download Directory. Adapt the path accordingly…)

You are now ready to execute the script.   we assume that you have internet connection available.  The script needs to download the xrdp package (the latest version from the xrdp community) from internet.  When you are ready, you can execute the script by issuing the following command in the command prompt.

We assume that you have downloaded or created the file in the your home folder under the Download folders.  If this is not the case, browse to the location and execute the script from there.

Wait for completion of the script.  The machine will reboot automatically when done.

Here, what you want to test is that you can effectively reconnect to the same session.  To test that, you will connect a first time to your remote Ubuntu machine, open some applications and then disconnect.  If the xrdp installation completed successfully, you should see the xRDP login screen (see screenshot) 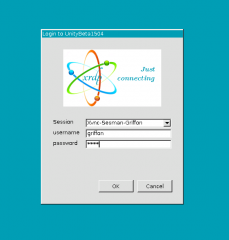 This is it for this post.  The process to perform a custom xrdp installation remains basically the same.  The only thing we had to change was path of the executable file for xrdp in the /lib/systemd/system/xrdp.service and /lib/systemd/system/xrdp-sesman.service to reflect the correct location in Ubuntu.  After that, we were able to have xrdp running properly.  You can now use the systemctl start xrdp or systemctl stop xrdp or even systemctl status xrdp commands to check and manage the xrdp service.

21 thoughts on “XRDP- Perform a Custom installation on Ubuntu 15.04 (with Systemd)”