A few months ago (I think in August 2012), MDT 2012 Update 1 has been released !   MDT 2012 Update 1 adds (officially) support to Windows 8/Windows 2012 os deployments. If you plan to deploy the latest operating system, you should upgrade your installation to MDT 2012 Update 1 (or use alternative solution such as Configuration Manager 2012 SP1).

In this post, we will simply describe the procedure that you need to perform in order to install and configure MDT 2012 Update 1.  We will be using MDT 2012 Update 1 in conjunction with ADK (see this post for more information about adk). You should know that Microsoft does not support MDT installation using concurrently WAIK and ADK packages.  If you are upgrading from MDT 2012 to MDT 2012 update 1, you will need to remove the WAIK package if you want to use the latest winpe 4.0 image.

Step 2 – Double click the setup.exe file and the installation wizard will start.

Step 3 – Proceed with the installation. When installation is completed, you can open the start menu (Windows 2012/8 style) and check that the Deployment Workbench icon is available. 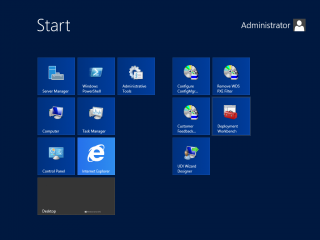 Step 1 – Open the Deployment WorkBench console and expand the Information Center node.  Click on the components node and you will see something similar to the following screenshot

Do Not install WAIK if you want to use ADK instead.

This is new in MDT 2012 Update 1. Indeed, as mentioned above, MDT 20112 Update 1 can be use  in conjunction  with the Windows ADK toolkit.  You can still use WAIK component if you want to but you cannot use ADK and WAIK simultaneously on MDT 2012 Update 1 (not supported by Microsoft).

Because we want to use the new ADK toolkit, we will disregard the information displayed on the Deployment Workbench in the components page.  Instead, we will simply install the ADK packages.

Step 4 – Configure your Deployment Share settings.  You will need to perform some additional configuration changes here. 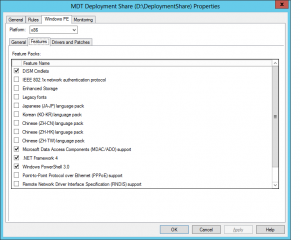 The Process will take some time. When done, you are good to go 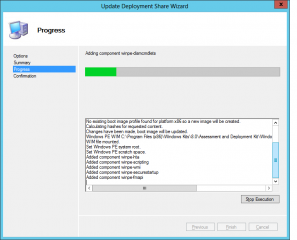 Step 5 – Optional, you can click on the Monitoring tab and enable the monitoring option. You can use this feature to track from your Deploy Workbench console the installation progress of your operating system.  You have also the possibility to perform a remote desktop on the target machine being deployed but only when the operating system is installed and loaded (not during the Windows PE process) 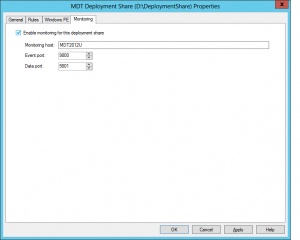 When you have performed this configuration change within MDT 2012 Update 1, you can start configuring your deployment infrastructure as you would do in previous versions.  You can have a detailed description how to import OS, Drivers and packages within MDT 2012 Update by following the instructions found in these posts

MDT 2012 Update 1 has  not changed dramatically.  If you have been working with previous version of MDT, you will get used to it quite quickly.  The main change brought by this version is the support for Windows 2012/Windows 8 and the possibility to use ADK instead of WAIK.    Improvements in the deployment wizard and in the UDI Designer have also been integrated.

The next steps for us would be to prepare some migration scenarios for future Windows 8 mass roll out   The deployment solution could be based on Configuration Manager 2012 or could be also based on MDT 2012 (which provides a professional alternative at no cost).