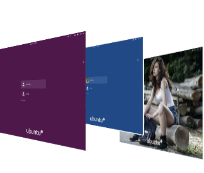 Ubuntu 20.04 has been out for some weeks now and the world is discovering the small but noticeable improvements that this release provides.   Most visible changes coming with Ubuntu 20.04 are related to performance improvements (compared to Ubuntu 18.04) and visual changes.    The Gnome Desktop has made really some impressive changes in the login & lock screen area.  In one of our previous posts, we have described these welcomed changes in the login process.

However, one area where Gnome Desktop team make it difficult is the possibility to change the background image at the login screen.   There is not really an easy option to set a background image or change the solid color background of the Gnome login screen.   Other Operating systems (like Windows) provides a built-in tool or mechanism that allow users and companies to modify in an easy way the login screen.  The fact that you can modify the login screen (especially in enterprises) is a highly request feature because they can create a corporate branding and identity.   It’s hard to believe that Gnome Desktop still does not provide such capabilities and we hope that next iteration of the Desktop will include such highly requested feature…

The fact that’s there is no easy way to modify the gdm login screen does not means that there is no way at all !  Keep reading…..

As the branding and corporate identity request was quite important for some of our customers, we had to invest some time in looking for ways to customize the login screen. We found the necessary information that would help us changing the look’n feel of the login screen and we published some information about it.  We even developed really simple and easy to use scripts to facilitate the customization process. We even found a graphical tool that could be used to change the login screen in Ubuntu (up to Ubuntu 19.10).

We have been publishing a few posts about the way you could change the gdm login screen and create your own branding using Ubuntu and Gnome Desktop.  You can retrieve these information by reading the following posts

As you can see, our script is little bit out dated and does not provide support to recent Ubuntu releases.  So, we thought it was time to update the script and add support to Ubuntu 20.04.  We really though that this would be an easy update activity.  It’s actually not the case…..as Ubuntu 20.04 has introduced a major change in the process….

Ubuntu 20.04 is shipping with a new version of the Gnome Desktop.  This new version of Gnome Desktop has also introduced a major change in the way customization can be performed.  In previous version of Ubuntu, the login screen background image was controlled via a css file which was readable and accessible directly.  In Ubuntu 20.04, this has changed as the gdm information is not stored in a “compiled” file…  This means that our previous script would not work against Ubuntu 20.04.  We are not the only one having the issue.  It seems that the Loginized tool (the current version) is not working either against Ubuntu 20.04 and cannot implement the customization….

Because customizing the login screen in corporate environment is still really important, we have decided to refresh our previous version of the script and to include support for Ubuntu 20.04. The Change-Gdm-Background.sh script version 3.0 will be released soon.  The script should be able to perform login screen customization while offering an easy way to proceed.  The script will still be quite basic and simple as we have not much time in working on it.

As we are not the only one working on providing simple way to change login screen background, we are expecting to see some new releases of the Loginized tool or that other people would be working on their own solutions. What we really hope is that the Gnome desktop team provides a built-in tool to perform such customization in the future.  There must be a way to offer a simple way to perform login screen customization…

Please be patient and remember that the script that will be released will work but will remains pretty simple…..