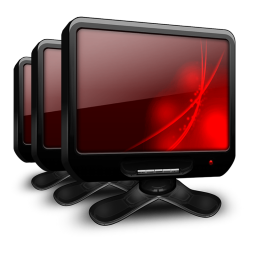 Note : If you want to read the previous posts about MDT 2012, have a look at

At this stage, you should be quite familiar with this method given that we have explained this approach in our previous posts in order to automate other actions.  In order to automatically join the computer into the domain, you will need to add in your CustomSettings.ini file the variable that will hold the information needed to join the domain or the workgroup.

To modify your customSettings.ini file, you can perform the following actions : 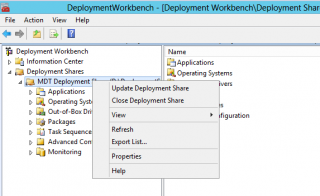 Append the information needed to join the Workgroup or domain.  The screenshot below shows you the parameters to use while joining a domain or a workgroup.  It should be obvious that you cannot use both options at the same time. It’s joining the domain or joining  a workgroup.  Comment the options you will not use. 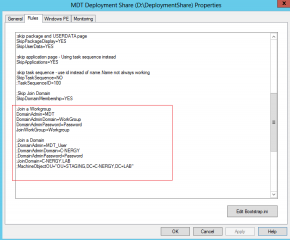 When using this option, you have to understand that these variables will be injected in the Unattend.xml file generated by the MDT application.  During the deployment process, the setup process will use the information found in the unattend.xml file and try to join the machine into the domain.  This works great if deploy your workstation in a simple environment.  However, for large deployment scenario, you might have additional requirements and constraints that will make the join of the domain more difficult.

A good example of complication while deploying an operating system and having the machine joined into the domain is when you have restrictire group policies that would for example display a legal disclaimer (and thus breaking the auto logon capabilities).  MDT team has taken this situation into consideration and you can delay the join of the domain till the last moment.  To achieve this, you will need to first modify the unattend.xml file and delete a specific node (see http://systemscenter.ru/mdt2012.en/deladomajointoavoiapplofgroupoli.htm for instructions or check the MDT help file). Then, you will need to add a step in your task sequence in order to have the JoinDomain.wsf script running and performing the join of the domain.

To update your existing task sequence to delay the joining of the domain, you can perform the following :

Open the Deployment Workbench console, navigate to the Task Sequence node. Select the task to be updated. Right-click on it and select properties. In the properties page, select the Task sequence tab

In the task sequence tab, click on Add, select Settings and then select Recover Domain 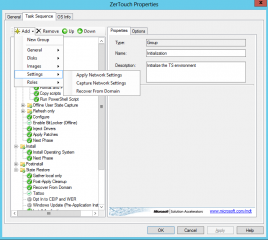 Accept the default and ensure that the step is set at the correct location in the task sequence tree.  In our example, this is the last step that will be performed in our situation. 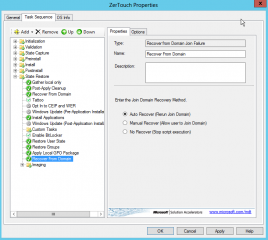 We think that using a PowerShell script within a task sequence provides more flexibility than using CustomSettings.ini file.  As you know, the customsettings.ini files paramaters are common to any deployment you will perform.  If you need to join computers into different domains, you could simply create additional Task sequences to use the appropriate script.  You could also use a single task sequence and run the appropriate join domain operation if your script is able to make the distinction between different domains.

Code to Join a workgroup

Code to Join a domain

You will have to copy the script in your Scripts folder under you deployment share.  When this is done, you can add a additional step in your task sequence.  You will need to select the Run a Powershell Script when adding the step in the task

The following screenshot shows the configuration of the step.  Note also that again, the task is one of the last one that will be performed. 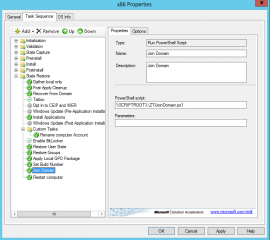 The third option will allow you to join a domain even if you have no access to the Active Directory infrastructure.  We had to come up with such solution in some projects for multiple reasons.  One of the reasons was that the deployment was performed in a staging area where no network connectivity to the production environment was available. On another situation, network connectivity was there but the network was configured with mac filtering.  Because of this, we had to configure a disconnected deployment infrastructure again and haved used the Offline Join Domain.

I’ve found some good information on how to use MDT 2012 and offline join Domain capabilities. The one that comes first is the following one http://myitforum.com/cs2/blogs/maikkoster/archive/2012/06/25/offline-domain-join-with-mdt.aspx.  However, we will not use the same approach.  Since MDT 2012 support powershell scripting capabilities, we will simply add at the end of the task sequence an additonal step that will perform the offline join operation.  You could use the run command line too.

The offline Join domain operation is a two way process.  You will first need to provision the computer into your active Directory.  You will need to run the following command

You will need to run this command for each computer that needs to  be joined while offline.  The above command will generate a text file that will be named as the computer name you have just provisioned.    In a real life scenario, you will probably want to automate the process.  You will need to get or create a input file which will contain the name of the computers to be deployed.  The name should be based on your naming conventions such as prefix-serialNumber.  This means that you will need to prepare a little the work by gathering the serial numbers or possibly getting a list of serial numbers from the manufacturer. In one of our projects, we have automated the process by using a really simple powershell script (see screenshot below).

Note that this is just a sample script that you can use as starting point.

When the script has run completely, you can go to your folder where you have stored your blobs. You should see something like this.  In our scenario, we have used the DeploymentShare\Scripts\blob folder to store the files that have been generated by the djoin.exe command line. 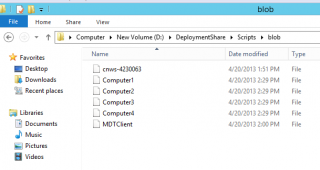 The second step in the Offline join process is to run the djoin command again but on the client and use the blob file (which contains information to join the domain) in order to perform the offline join operation.  You will need to execute the following command (or similare based on your scenario) on the workstation or server to be joined into the domain

Again, we have created a small PowerShell script that will be used to automate the Offline Join process during the MDT Deployment process. The sample script you can use would look like the following screenshot

You will store this script in the Scripts folders under the MDT Deployment Share.

When this is done, you can update the task sequence in order to add the offlineJoinDomain step.  This will follow the same principle as before.  You will add a step at the end of the task sequence tree and select the option Run Powershell Script.  The following screenshot shows you the settings we have configured on the page. 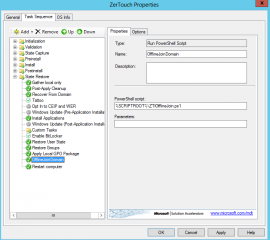 This ends up this post ! As you can see, you have several options in order to automatically join a computer into the domain.  We prefer to use task sequences in order to join computers into the domain because we have the feeling that the process provides more flexibilty.  However, there is security question while automatically joining the computer into the domain.  If you use the CustomSettings.ini, the user account and password are stored in clear text.  To mitigate the risk, you should create a dedicated user (or a group where the user will be a member of) and delegate the right to join the computer accounts into the domain.

The usage of PowerShell script also store the password in clear text.  With Powershell script, we might have options to either encrypt the password or encrypt the script. (I do not know I have not tested this).  The blob approach is really the most flexible one but once again the blob file contains some sensitive information you do not wanna spread widely.

I think that there should be a trade off between the security risk and the level of automation you want to achieve.