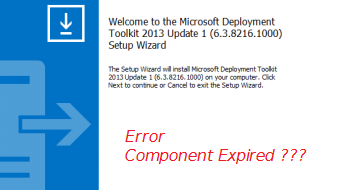 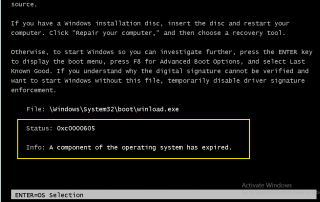 To overcome the problem, some customers have decided to use LiteTouch.iso file (burn into a cd or mount it in a virtual machine) and tried to boot from the litetouch winpe iso image.  Guess what ? the same error message was just displayed after the system booted from the iso (see screenshot below). 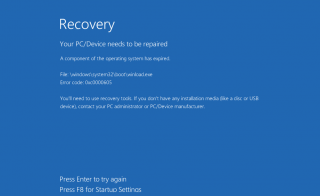 The solution was pretty straightforward. When some of our customers/readers started to receive this error, there was not much information about this error message : component has expired.  Scratching our heads we started wondering if indeed reading the message, we could find hints in order to solve this issue.

We started investigating the issue and looked a little bit everywhere. The problem was really lying in the boot process (see above pxe and boot from iso lead to the same error).  We decided to open the WDS Console and moved to the boot node.  At first, we didn’t notice anything special.

Then, we again, we thought about the message (component expired).  We thought that there was maybe a mismatch in version of the Operating system.

Comparing the OS Version in WDS and in the Deployment benchmark, we immediately identified the mismatch (see screenshot). 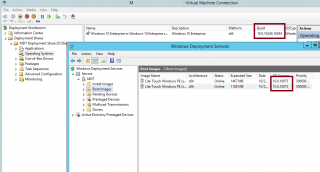 The origin of the problem was that some of our customers were still running the MDT 2013 Update 1 Preview version.  When they started having the issue, the Preview was reaching its expiration date and thus explains the strange message displayed while trying to deploy operating system via PXE or Bootable iso.

The fix was pretty straight forward.  Simply upgrade your MDT 2013 Update 1 Preview to the final version. Replace the LiteTouch Winpe images in the WDS console and you should be good to go.  As a visual check, you can compare again the OS version in WDS and the build number in the deployment benchmark and they should match.

After making this changes, you should be able to deploy your OS again with no issues

As the small issue described above shows; software life cycle management is important especially when testing and validating preview versions.  Beta, RTM, Technical preview come to expiration and you need to upgrade your infrastructure on a regular base in order to have the latest up to date infrastructure and functionalities available to you.