We continue our journey in investigating possible issues that might show up if you try to perform a custom installation of xRDP on Ubuntu 16.04.3 release.  Indeed, the Ubuntu 16.04.3 has introduced a change that break the custom installation process of xRDP.  More specifically, when trying to compile xorgxrdp component from sources, a fatal error will occur as a necessary file is not anymore available within Ubuntu operating system file. In this post, we have described the small bug and provided two way to overcome this problem..

After fixing the bug and trying to connect through the remote desktop client, two additional issues showed up affecting (so far) Ubuntu 16.04.3. The funny thing is that all these issues present the same symptoms.  After passing the credentials in the xRDP login page, only the green background page is displayed and Unity Desktop interface never shows up.  The first issue is related in the way Ubuntu treat authorization of running X Server.   In this post,  we have described how to identify the problem and how to fix the problem as well.  In short, you need to edit the Xwrapper.config file and ensure that anybody can run X server.

Again, after fixing this issue, time to test the connection and access to the remote  desktop. And….again, only the green background screen was displayed and no way to access the remote desktop interface….. This issue might be specific to virtual machines.  Indeed, we are working exclusively with virtual machines (no physical machines) and we have encountered this issue while operating Ubuntu as virtual machines…..

So, enough teasing, time to identify and fix the issue….. 🙂

As mentioned earlier, Ubuntu 16.04.3 was installed as a virtual machine on an Hyper-V virtualization platform.  Based on our recent findings and user reports, the Ubuntu 16.04.3 was configured to take into account the recent bug and configuration changes introduced by Ubuntu.  The following configuration changes were performed on the Ubuntu machine

However, after trying to connect using Remote Desktop client, we ended up again with the infamous green background screen 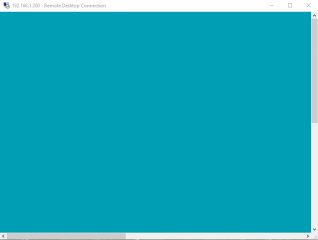 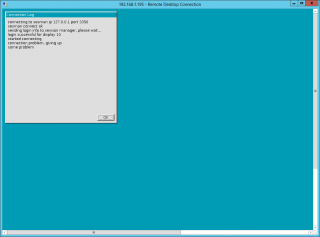 This was really disappointing !

To find the solution to this problem, we first needed to identify the problem. Again, to troubleshoot the situation, the different log files were useful.  /var/log/xrdp.log and /var/log/xrdp-sesman.log were not really useful.  More interesting logs were the  ~/.xorgxrdp.10.log and possibly the /var/log/Xorg.log.  The screenshot below shows the content of the ~/.xorgxrdp.10.log 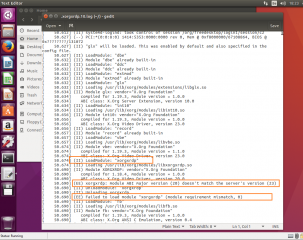 We looked multiple times into the file before noticing the most important information. In the log file, the following error is clearly shown.

This unclear message simply means that some xserver-xorg components are not present on the system or that the one present on the system are not the one needed to have xorgxrdp starting properly.  After looking for some info about this error message, we discovered that the easy fix was simply to install xserver-xorg-core package on top of the Ubuntu 16.04.3 machine.  To install this package, issue the following command in a terminal console 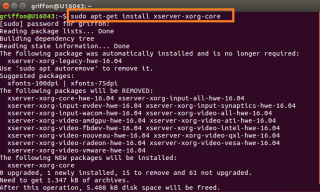 After that, reboot your system and try to perform your remote desktop connection and finally after all these efforts and tweaks, you should see the Unity Desktop interface loading and you can start working remotely on your Ubuntu machine…..

If you are using Virtualbox, you may or may not encounter the issue.  This will depend on the way the virtual machine has been configured.  Let’s assume that you have reached the situation where you have installed the fix, configured the Xwrapper.config and you can still not access the machine via Remote Desktop….

The problem is similar to the one described above.  If you open the xorgxrdp.XX.log file, you will see the same infamous error

Again, in this case, the solution is quite simple. You need to install the xserver-xorg-core package on your system. To install this package, issue the following command in a terminal console

The other solution is to check if the Virtual box graphic card drivers have been installed on your virtual machine.  To check if the drivers are installed or not on your system, you can perform the following tasks. 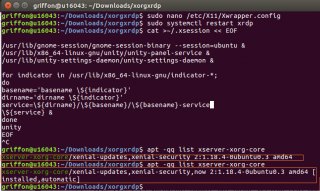 As you have probably got it, installing the Virtual box Graphic drivers install in the background the xserver-xorg-core package (as shown in the screenshot below)

The first command was executed before installing the Virtual box guest drivers and you can see that the package is not marked as installed…. The second time we ran the command, the virtual box graphic drivers were installed and boom, the xserver-xorg-core package is present as well….

As Ubuntu 16.04 is a long term support release, it make sense to perform a custom installation of xrdp in order to enable clipboard support and drives redirection.  On the other hand, Unity Desktop interface is being dropped and replaced by the Gnome Desktop interface.    Based on all the recent issues and fixes detected, there is a need to update the install-xrdp-1.9.sh script to integrate all these changes.  This might be the last time we will update the script as the next long term release is at the corner.  Ubuntu 18.04 will be based on Ubuntu Gnome Desktop and would definitly ship with a recent xRDP package that would provide the benefit of a simple and straight forward installation…

We shall see what the future brings….