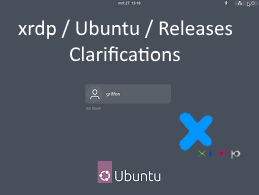 It has been some time since our last post which was related to xRDP and Ubuntu 17.04 (using Gnome Desktop). It seems that there is some confusions in regards of the new xRDP version and the decision of Ubuntu to move away from Unity.  This idea of this post is to provide a better understanding of the changes that occurred in both xRDP and also to see how this impact the installation process of xRDP on Ubuntu computers.

For a long time, the official supported package for xRDP was set at version 0.6.xx.  This version lack a number of features but provided a way to perform remote desktop connections against a Linux machine.

Since January 2017, xRDP team has released (as an official and supported release) the package 0.9.xx.  This version introduces major changes and features.  The first big change that has been introduced is the removal of dependencies on vnc servers.  In xRDP 0.9.xx, a new backend server component (xorgxrdp) is included by default and replace the actual vnc server we used to install in order to make xrdp working.  You do not need to install anymore tigervnc server, vnc4server, x11vncserver,…. By installing the xrdp and xorgxrdp components, you have everything you need to make a remote connection to your Linux (Ubuntu) machine.

The other major changes introduced that getting more attention as well is the addition of drives redirection and clipboard functionalities.  These functionalities have been requested by user community for a long time and now it’s quite of integral part of the xRDP packages (even do the solution does not always works 100 %).   Some people are also looking for sound redirection.  It’s seems that xRDP can provide such functionality as well (but might need extra configurations).  The printer redirection in a Linux environment so far is a no-go.. (as far as i know)…

So, with years, we can say that the xRDP team has worked on improving their solution.   xRDP could become the default solution to perform remote desktop connection against Linux machines if standardization would be implemented

Let’s see in more details what needs to be done….

This is where a lot of people get confused.  In Ubuntu 16.04, by default, xRDP package version 0.6.xx is available.  This package does not provide the xorgxrdp backend server and does not provide drives redirection and clipboard features.  Moreover, without any additional configurations and installation, you will not be able to access the Unity Desktop, you would need to install a alternate desktop…

By performing a custom installation, you will have access to the latest features which includes xorgxrdp backend component, drive redirections, clipboard feature and access to the Unity Desktop Interface.  A lot of people are still using Ubuntu 16.04 because this is an LTS (Long Term Support) release.  Because of this, we had to update the installation guide for xRDP and Ubuntu 16.04. The latest valid process to have xRDP installed on your system running Ubuntu 16.04 and having access to Unity Desktop is described in the post mentioned hereafter

In Ubuntu 16.10 and later, xRDP package has been upgraded to version 0.9.xx which means that xorgxrdp, drives redirections, clipboard feature are included.  If you want to connect to the Unity Desktop through xRDP sofware, you can find the necessary information through these posts

XRDP – How To Remote Connect to Unity Desktop on Ubuntu 16.10

XRDP- How to Start Unity Automatically in Ubuntu 17.04

Because these releases ships with the latest xRDP package version (0.9.xx), the installation process is much simpler and it’s possible to get out of the box features like Drives Redirection and Clipboard option.  Moreover, it’s possible to have access to the Unity Desktop as well after performing some minor configuration changes.

Ubuntu 17.10 will be released in October 2017 and will also be an interim release.  Ubuntu 18.04 will become the next Long Term Support (LTS) release of the operating system.  However, Canonical has decided to drop the Unity Desktop Interface and replace it with Gnome Desktop.   Moreover, lightdm display manager will be replaced as well.  This means that there is a lot of changes to come.

To start our learning curve with Ubuntu Gnome, we have published a post explaining how to have xRDP working with Ubuntu Gnome 17.04.  This post has showed us that Ubuntu + Gnome Desktop is a different beast than Ubuntu with Unity Desktop and some changes in the installation process is needed to make it work.  We are expecting some more challenges in the coming releases of Ubuntu.

We have started using Ubuntu Gnome 17.10 and the Ubuntu gnome desktop.  The desktop as shipped by default is not really practical. As a lot of people, we have started customizing the desktop to have a proper dock visible on the desktop.  As more information are made available about Ubuntu 17.10, we have recently learned that this version would ship with a dock which would help the transition from Unity to Gnome Desktop.

Because Ubuntu 16.04 is an LTS release, we are expecting to have a lot of people sticking to it.  This release ships with an older version of xRDP software.  If you are using Ubuntu 16.04 and you need Unity Desktop access and Drive redirection, Clipboard feature, you have to perform a custom installation which will install the latest version of xRDP (currently at 0.9.xx)

Because of the recent changes in xRDP software and recent announcement of Canonical to drop Unity Desktop,  we are expecting some changes in the installation process of xRDP package on the new Ubuntu releases shipping with Gnome Desktop.   We have already described a working solution for Ubuntu Gnome 17.04 but we are waiting the next version (Ubuntu 17.10) shipping with the personalize gnome desktop and see if xRDP can still be used.

In the coming months, we will publish more information about xRDP and the new release of Ubuntu.  We need to update our knowledge first and then we will be able to share some information through posts.  It seems that we need to start over again….