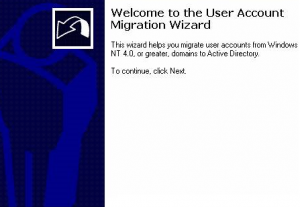 In my current assignment, we are preparing a inter-forest migration between two active Directory forests.  So far, nothing unusual.  There is just only little problem we have discovered.  We cannot use ADMT 3.2 in conjunction with Windows 2012/R2 servers.

We discovered the hard way that the current version of ADMT (3.2) cannot be installed on a Windows 2012 (or later) machine.  This is by design.  ADMT 3.2 and PES 3.1 are not supported for installation on Windows Server 2012. The installers intentionally block unsupported operating systems. (see http://support.microsoft.com/kb/2753560)

You might think that simply adding a Windows 2008 R2 server on your domain would fix your issue.  The only problem here is what if you want to migrate password (using PES). Guess what ? You need to install it on Domain Controller and the domain controller needs to have Windows 2008 R2 operating System installed.
Finally, you might think that you can install ADMT and PES in your source domain and you would be able to migrate to your Target forest which contains only windows 2012 Domain controllers. Guess what ? You cannot !.  Apparently, the tool is requiring to have a Windows 2008 R2 Domain controller in the target domain as well.

Using these Powershell cmdlet, you can lower forest/domain level down to Windows 2008 level (I Think)

The good news is that Microsoft is working on a new version of the tool which would support the latest Operating system.  There is no release date yet but based on this post, the tool should be released during the first quarter of 2014 (which is now !).  We have not seen any other announcements yet so we assuming that the ADMT 4.0 will be delivered  somewhere in 2014.

If you are like me, busy with migration and where Windows 2012 R2 deployment projects coexists, you might end up in having a issue migrating your Active Directory by using the current version of the ADMT 3.2 tool.  The good news is that Microsoft provides a workaround which seems to be usable as long as you do not have enabled feature that specifically requires Windows 2012 R2 Forest/domain level.

The other good news is that Microsoft is working on a new version of the tool which will fully support the latest version of the Operating System.   We are just waiting for the tool to be released.  As soon as the tool will be available, we will provides some posts on it

6 thoughts on “Using ADMT to migrate to Windows 2012 Domains”