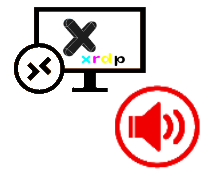 We are slowly preparing the next iteration of our xrdp installer script since a new LTS version of Ubuntu (i.e. 22.04) will be released soon.  While working on that, we have noticed that the xrdp maintainers team have introduced some changes in the way we need to build the sound redirection modules.    This change is due to the fact that PulseAudio compilation process has changed.  They are using now the meson technology.

So, time to test this new process and see if we can include this in the next version of the xrdp-installer script…. Let’s do this ….!

As mentioned above, PulseAudio 15.0 and above is using meson technology to build the needed modules and the ./configure approach has been deprecated.  We noticed the issue when we worked on the xrdp-installer script version 1.3 and we adapted (quick and dirty) our code to have it working against Ubuntu 21.10 and later.  When we released the script, xRDP maintainter teams didn’t updated yet their wiki with the new instructions…

Since then, the xRDP pages have been updated and a more up to date instructions guide has been made available.  The process seems to be simplified since the xRDP team is providing some scripts that can be run against a specific number of Linux Distros that will ease the build process of the necessary modules to enable sound redirection.   This is the perfect moment to test this new procedure and see if there is no drawbacks

Please note that these instructions are really specific to Debian based Linux Distributions !!!

The script(s)/instructions hereafter are provided AS IS.  Use it at your own risk !!!

The Building Process – The New Way

In the past, the building process was a little bit more complicated than the new way.  Indeed, nowadays, xrdp team is providing some scripts that can be used to build the necessary modules…In the next section, we will summarize all the necessary steps needed to build and install these modules and make sound redirection working when using xRDP software solution….

To successfully build your modules,  you will need to ensure that

Some additional tools and packages might be needed in order to build and compile packages.  To ensure that all the necessary tools are available on your system, issue the following command in your favorite Terminal Console 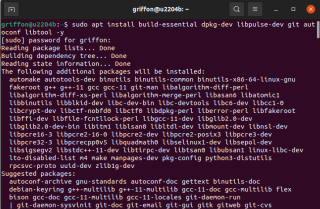 In this step, we will need to obtain the necessary files from xRDP github web site.   We will download the pulseaudio-module-xrdp files in the User’s home directory by executing the following command in a Terminal Console 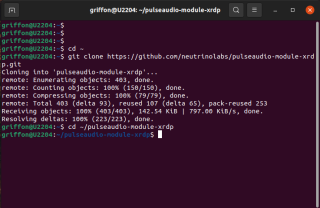 This should be really fast.  When the download is completed,  we can start building up our modules.  As mentioned earlier, the process has been simplified since the xRDP team is providing some easy to use script to perform all the necessary actions…

Execute the Script provided by xRDP

So, time to execute the script.  From your Terminal Console,  issue the following command to ensure that you are located in the correct folder !!! 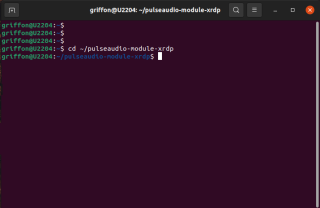 From your Terminal Console,  execute the following command 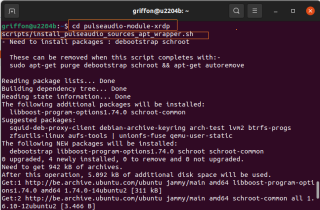 When script is finished, please check the last line displayed.. It will tell you if the script ran successfully or if there are any problems or issues.  This line will also specify where the PULSE_DIR location will be.  This information is needed later and this is an important one… 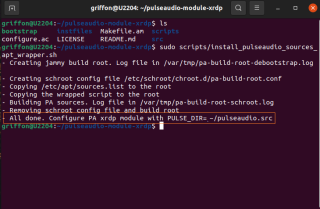 In your Terminal Console,  it’s time to build our modules by issuing the following command from the folder ~/pulseaudio-module-xrdp

Note the PULSE_DIR Parameter to be passed.  The information was made available in the previous step.  If you didn’t change any scripts, the location should be always the user’s home directory

Finally, time to build our xrdp modules by issuing the make command 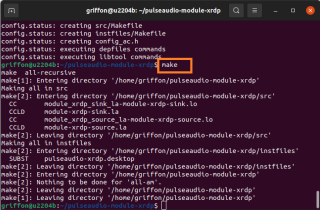 If everything worked ok till now (no error messages!!!), it’s time to install the modules we have just build.  To install them, this is super simple, we simply need to execute the following command

This command should place the modules in the correct directory and should copy a script called load_pa_modules.sh by default in /usr/libexec/pulseaudio-module-xrdp location. Finally, the install process will also execute a startup script that will call the load_pa_modules.sh script when the desktop is loaded which is solving the issue described in this post (xRDP – Sound not always working on Ubuntu 19.10 – Quick Fix).   The startup script will be place in most systems under /etc/xdg/autostart folder.  The startup script should be called something like pulseaudio-xrdp.desktop

To confirm that the modules have been properly installed, you can issue the following command

If the module-xrdp-sink.so and module-xrdp-source.so are listed, this means that the PulseAudio modules have been properly built and installed on your system 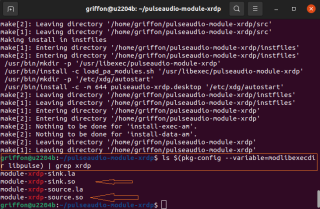 The new way of building and installing xrdp pulseaudio module has indeed been simplified.  The process works against Ubuntu and Debian whatever PulseAudio version you are using.  While testing more and more distributions, the convenience scripts are not working against Pop!OS operating system. The script is throwing some errors one related to the missing repository or missing dependencies. You can check errors through the log file generated by the script.  You can see some screenshot of possible errors we got on Pop!OS 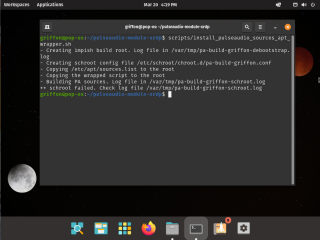 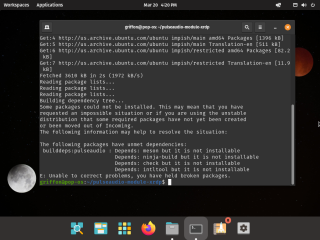 The other thing we have noticed  is that the installation takes quite a long time using the convenience scripts.  This is really a minor issue but better be aware of this point….

This is it for this post !  As you can see, there is indeed some changes coming with the xRDP package and sound redirection.  In our previous version of the script (version 1.3), we already encountered the issue with the sound redirection and we needed to update the code (quick and dirty fix) to make it work on Ubuntu 21.10 which ships with PulseAudio.  The new way of building the xrdp pulseAudio module is rather straightforward but since it does not seems to work with all Linux distributions; we might want to keep “for the moment” our custom code… We will see what would be the best option….