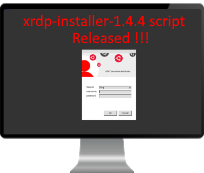 In one of our previous post, we have mentioned that the latest version of Ubuntu (version 22.10) has been released. This is a short term release where support will be offered only for 9 months.  Since there is a new release, we usually tend to review our famous xrdp-installer script and check that everything is still working as expected.  Indeed, time to time, new releases introduce some changes that break the installation process.

With this post, we are happy to let you know that the version 1.4.4 of the xrdp-installer script has been released and should support Ubuntu 22.10. This new version is mainly a maintenance release and no major new features have been added.  We have not much time for the moment to work on introducing new features into the script (we hope that in 2023, it will be possible 🙂

The script version 1.4.4 replace all previous and will work exactly the same way as previous versions. Historically, the xrdp-installer script was focusing on Ubuntu + Gnome Desktop interface. However, based on feedback and requests from users, we are trying to take into account more distributions and the script should run against other Ubuntu Flavors and Debian.  Integrating these additional Ubuntu flavors is based on best effort and we cannot guarantee that everything would work as expected.

As mentioned above, this script version is more a maintenance release that will ensure that the script will run against the latest version of Ubuntu i.e. Ubuntu 22.04.  There is no new features included in this release.  We were suppose to modify a little bit the script to perform a better desktop detection (based on Hiero feedback) but since we are overloaded by work, we had no time to include this new feature.

As you probably know by now, Ubuntu 22.10 ship by default with a new Sound server called PipeWire.  Previous version of Ubuntu are using Pulseaudio Sound Server.  The Sound server replacement has an important impact if you are using xRDP sound redirection feature.  xRDP sound redirection feature is based and expect to have a PulseAudio Sound Server and not PipeWire.

As far as we know, xrdp sound redirection will not work when PipeWire is installed on your Ubuntu machine. The team behind the xrdp software is not really working on updating their software to support PipeWire package .  However, some discussions have started and maybe they might provides some more information about their decisions and a a possible roadmap…. 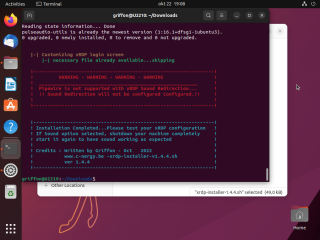 In order to detect which Sound server the machine is running, we need to install a small pulseaudio-utils package.  Using this package, we are able to detect which sound server is running.  Since this script is a maintenance release, we have ensured that the package is only applied to Ubuntu 22.10. In a coming version, we will probably re-write this part of the code 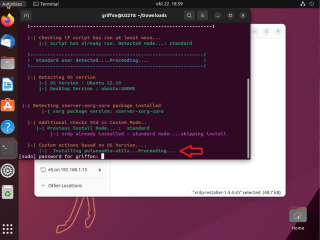 The xrdp-installer-1.4.4 script will work in a similar way as the previous versions. The following section will explain how to download, extract, set executable mode and perform the installation using the script.  The script provides some switches that can be used to customize the installation process.

The xrdp-installer-1.4.4.sh script will support the following Ubuntu operating system version assuming that Gnome Desktop is the default Desktop interface

The xrdp-installer-1.4.4.sh script can be run against the following Ubuntu flavors but we cannot guarantee that everything will work as expected (best effort)

Download the xrdp-installer-1.4.4.sh script to your system, extract content and mark it as executable . To do this, perform the following action in a terminal console

Note : Adjust the path where the xrdp-Installer-1.4.4.sh script to reflect your environment

The xrdp-installer-1.4.4.sh script can be executed as is (with no parameters or switches). This will perform a standard (and basic) installation of xRDP.  No sound or custom xrdp login script will be made available.  However, remote desktop, drive redirection and clipboard redirection would be available with this installation mode.

The xrdp-installer-1.4.4.sh script accept also some additional parameters that will help customize the xrdp installation and enable additional features.  The script provides the following parameters

The script version has not been tested extensively but we hope that the minor changes we have introduced will not cause any additional issues. Again, this script is mainly a maintenance release in order to include support to Ubuntu 22.10 release. As soon as we have more time, we will try to keep working on the script and introduce some changes that have been either requested or suggested by some readers or to simply improving the all process….