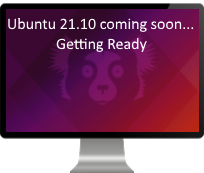 You have noticed that we have been quite busy lately and we are trying to publish (slowly still) some new information about Ubuntu, Debian, xRDP and many more technolgies.  Since Ubuntu 21.10 is really around the corner and should be released on October 14th, 2021,  we basically have two weeks to release our famous xrdp-installer script and include support for Ubuntu 21.10.

We do not know if we will be able to release the a fully functional xrdp-installer script.  The reason behind is that since technologies evolved, new ways of doing things are introduced as well… These new ways of working has “broken” some parts of the script and we will need to adapt it again in order to have a smooth experience…

If you follow us for a long time, you know that we have also developed a small script that can help customize the login screen background image (see Ubuntu- Change-Gdm-Background script Version 3.2 – Released).  Since Ubuntu 21.10 is shipping with a new version of Gnome Shell and that Canonical has also introduced some changes in their Yaru theme, the current version of the script will not work against Ubuntu 21.10.

However, we have already been working on a fix for that and a new version might be shipping quite soon.  The next version of the script will be able to change background image on Ubuntu 18.0x up to Ubuntu 21.10.   The script should be released before end of October 2021 and if the fix is really minor it can be released even sooner…..

xrdp-installer script not working on Ubuntu 21.10

Our famous xrdp-installer script will not run by default on Ubuntu 21.10 operating system because it will not be listed as a supported Operating System.  While this issue is easily fixable, we have encountered another more challenging issue with Ubuntu 21.10. This is not actually a problem with Ubuntu 21.10 per se.   The xrdp-installer script allows you to enable sound redirection within your remote desktop session.  However, Ubuntu 21.10 is shipping is a more recent version of pulseaudio package.  This new version has moved away from the standard ./configure, ./make ,./make install technics and they are now using the meson technology to compile their package…

Obvioulsy, since the xrdp-installer script was using the standard way of compiling package, we have now to adapt it in order to compile properly the xrdp-pulseaudio package and make it working on Ubuntu 21.10…

We have just discovered the issue today…We have tried to perform the installation using the latest version of the script and we have selected the option to enable the sound.  The script would run and the basic xRDP functionality will be there. However, examining the output of the script, you will see that some errors have been thrown when trying to compile xrdp-pulseaudio package.. The good news is that we are already working on this issue and we hope that we will be able to release the latest version of the script (fully functional) by End of October 2021.

Ubuntu 21.10 is really around the corner and will be released on October 14th,2021. Ubuntu 21.10 while being an interim release has introduced an number of small changes that is breaking the change-gdm-background script and also breaks some part of the xrdp-installer script.    We are already working on providing an update version for both scripts and we hope that we will be able to release them ride on time.