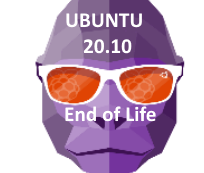 As we are currently extremely busy, you would have noticed that we are publishing a little bit less posts than usual.  We are currently working on an important project (virtualization) which take us really a lot of time.  This means also that we might take some time before answering questions and comments that our followers would submit to us…

The post of today is about  release cycle for Ubuntu Operating System. In this post, we will quickly check what does that means for you and what you could do to go back to a supported situation..

As you probably know by now, Ubuntu 20.10 (coded name Groovy Gorilla) has reached end of Support in July 22, 2021 !  This simply means that you will not be receiving any updates and patches for this release which puts your machine at risk.  It’s strongly recommended to upgrade your Ubuntu 20.10 machine to a supported Ubuntu version where support is still offered.

At the moment, we are not planning to upgrade the xrdp-installer script (which is currently set at version 1.2.3).  This version still includes support for Ubuntu 20.10 but we are expecting that everybody would move away to Ubuntu 20.04 or Ubuntu 21.04.   We are currently working on the new version of the script and we have already published a preview version of the script (see xRDP – Next Version of xrdp-installer script – Preview Version)

The preview version is still in beta mode because we still have to perform some extensive tests and validation. But feel free to give it a try and provide feedback !! We will probably release the new version of the script when Ubuntu 21.10 will be released.

Ubuntu 20.10 might have been seen as a boring update where no real exciting features have been provided.  However, Ubuntu 20.10 introduces a really nice feature in the installer wizard : the option to Join Active Directory domain.  This small feature indicates that Canonical is slowly targeting corporate environment especially the one relying on Active Directory. Ubuntu could become an interesting alternative to other operating systems

Since Ubuntu 20.04 release, we can see that Canonical is working on consistency, look’n feel, branding and interoperability.  The operating system has become really stable and provide a consistent and pleasant experience.  The experience is so pleasant that we have received more and more requests to install and deploy Ubuntu instead of Windows, mainly home users.