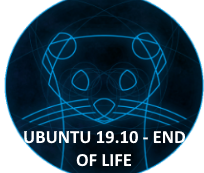 It has been a while since we have posted something about Ubuntu Operating system or xRDP installation script.  As we have been busy with different type of projects and since the Ubuntu 20.04 is rather stable, there was no really a need to write about Ubuntu :).  However, a few days ago, we have reached an important milestone in Ubuntu World :

So, let’s see what’s does that mean for us and how to move forward and say goodbye to the most performant release…

As you probably know by now, Ubuntu 19.10 (coded name Eon Ermine) has reached end of Support in July 17, 2020 !  This simply means that you will not be receiving any updates and patches for this release which puts your machine at risk.  It’s strongly recommended to upgrade your Ubuntu 19.10 machine to the latest Long Term Support release (i.e. Ubuntu 20.04)

The upgrade decision will obviously depends of the Ubuntu release you are currently running.

If you are running Ubuntu 19.10, you should already get prompted through the software Updater utility to upgrade to Ubuntu 20.04.   If you have been running Ubuntu 19.10, there is not too much risk to move forward and to benefit from all the new features and improvements that Ubuntu 20.04 is offering.   People running interim releases tends to be more agile and are willing to test and work with latest version of a product or solution.

If you are running Ubuntu 18.04 which is also a Long Term Support release, the normal process would be to wait for the Point Release of Ubuntu 20.04 before proceeding with an in place upgrade or a refresh of the Operating System.  The first point release usually contains fixes for problems that might have been discovered during the first months of Ubuntu usage.

The Point Release update should have been already available but Canonical announced some weeks ago already that some delays would be expected.  Recently, we have been informed that the Point Release would be made available in August 2020.   When released,  Ubuntu 18.04 should start also notifying users that a new LTS version exists and a dialog box will offer the possibility to upgrade the system to Ubuntu 20.04

Ubuntu 20.10 release which will be an  interim release is under heavy development right now and should be made available later this year (October 2020). To be honest, we have not been looking yet into this  version and we not sure what new features might this release bring as Ubuntu 20.04 is already quite stable. Obviously, we are expecting improvements in the Desktop interface and login screen but also new kernel and more security features in the coming release.  Finally, we hope that the performance gain provided by the latest iteration of the release would still be present and even more improved in the coming release

At the moment, we are not planning to upgrade the xrdp-installer script (which is currently set at version 1.2).  This version still includes support for Ubuntu 19.10 but we are expecting that everybody would move away to Ubuntu 20.04.  When the point release Update will be made available, we will need to test and validate that no changes have been introduced with the update that would break the xrdp installation process.  If this would happen, then yes, a new version of the script will be released….

Ubuntu 19.10 was really an amazing version because of the performance improvements that have been really tangible.  A lot of people have been surprised by the smooth experience that has been achieved when using Gnome Desktop interface.   However, it’s time to say goodbye to this release and to move forward with Ubuntu 20.04 which is the most stable and pleasant version of Ubuntu so far…