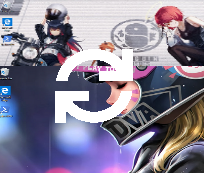 This post is investigating the possibility to refresh a desktop wallpaper without the need of a logoff/logon operation.

The idea of this post comes from a real case scenario.  We have been asked by a customer to find a way to quickly update the Desktop Wallpaper.  This customer decided to use Desktop wallpaper as communication medium in order to distribute information, recommendations or instructions to be followed during COVID-19 Crisis while working at company premises.

The Desktop Wallpaper was centrally managed and distributed to users through group policies.  The customer wanted to update on regular base the wallpaper in order to communicate critical information and guidance to their users.  However, this specific customer discovered that as long as a user wouldn’t perform a logoff/logon operation, the desktop wallpaper wouldn’t be updated and will not show the latest desktop image distributed via Group Policies through the network.

As mentioned earlier, our customer was basically using Group policies to centrally manage and deploy Desktop Wallpaper on corporate workstations and laptops.  With the COVID-19 Crisis, new desktop wallpaper needed to be distributed and displayed on the user’s desktop.  Updating the Desktop Wallpaper was a quick and efficient way for that customer to share important information and guidance through the organization.  A user would not need to open his mailbox to know about new policies to be followed.

The IT Team was using a dedicated group policy to set,manage and deploy the Desktop wallpaper.  The following screenshots shows the really basic settings that needs to be configured at GPO level in order to set desktop wallpapers 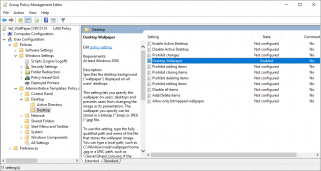 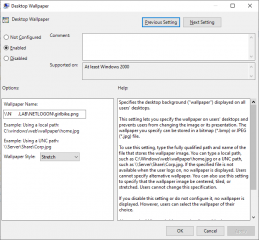 This customer decided to deploy a new Desktop wallpaper through the GPO.  The existing GPO was modified accordingly.  After some time, the GPO would be automatically applied to the target users (or machines). It’s possible to force the refresh of a Group policy by issuing the following command

We have run the resultant Set of Policy (rsop.msc) mmc console to ensure that the new GPO (and thus the new file) was effectively applied on the system.  The new GPO was in place. So, customer expectation’s  was that the new selected desktop wallpaper would be displayed on the screen.  However, the new Desktop wallpaper was not showing up even after multiple gpupdate /force command execution.

In fact, as long as the user does not perform a logoff/logon, the desktop wallpaper would not update. Also, locking/unlocking screen wouldn’t update the wallpaper.

For us, this command didn’t really work.  More specifically, the command was working inconsistently which make it unusable in this really specific scenario….

We had to find another option.

We have tested this script manually and we had 100 % success each time the Desktop Wallpaper GPO (and thus image) was modified…..

So, when the GPO to set the wallpaper was updated,after running the “gpupdate /force” command on a target machine, the desktop wallpaper wouldn’t be updated automatically. Executing the above script was basically updating the user settings in the loaded session and the wallpaper was changed accordingly….

So far, we have simply demonstrated that’s technically possible to update a desktop wallpaper without having the user performing an logoff/logon operation.  Now, the next challenge we have been asked to solve was to find a way to trigger the script when the GPO would be modified…. Probably multiple options would exists and we will present some of them hereafter

So, the first option would be to push a immediate schedule tasks through the network using Group Policies preferences so the new desktop wallpaper would be visible to the user quite quickly after you have modified the GPO.  Obvioulsy, you will have to follow the following steps

We can now create our Immediate Scheduled task GPP. To do that, edit the GPO that will be used to deploy the task, go to User Node > Preferences > Control Panel Settings > Scheduled Tasks. 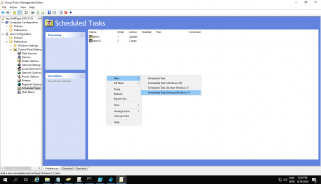 In the new Immediate tasks dialog box, Provide a name for the task and leave default for the other settings. Move to the action tab 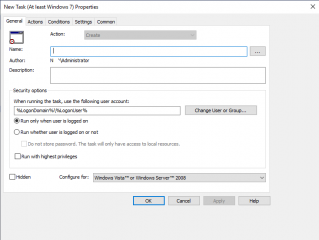 Click on new and in the new Action dialog box, provide the correct information 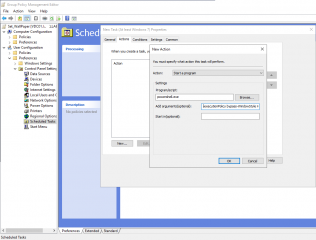 In the common tab, leave the default.  Please note that you should not select the option Run in logged-in user’s security context (user Policy Option).  If this option is selected, the GPO will not run and will throw an error in event viewer. 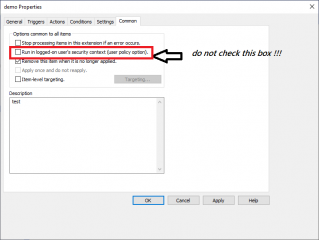 When the gpo is created, it’s time to push it through your networks.  So, you can force a gpupdate centrally or you can wait for background refresh of the policies and the desktop wallpaper would be updated quite quickly without the need of a logoff/login operation.

Now, another option would be to modify again the script in order to have it running on a specific interval in an infinite loop and distributed to the target machines.  You can use a login script that would execute the script indefinitely. When a new Desktop wallpaper is deployed and when the gpo is refreshed, the script will kick in and update the wallpaper within the user session.  You can also copy shortcuts, batch file in the startup folder on the target machine.  The script would have been modified accordingly to have it running on a infinite loop.  Obviously, with the Startup Folder approach,  all the users needs to perform at least on logoff and logon first in order for the script to be executed and start as a background job ! 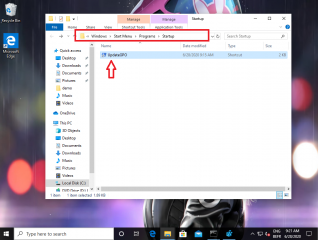 You have multiple options obviously.  You can again create a scheduled tasks that would run at logon or at specific time in order to have the script kicking it on regular base so if a desktop wallpaper would change, this would be reflected quite quickly on users desktop… Another option might be to convert the script into a proper windows service and have it deployed through the organization.  Same principle here : the service would get triggered on a regular base in order to update the user preferences in the current session.  if a new wallpaper would be deployed, the service would kick in and refresh the desktop…

As demonstrated, it’s possible to force a desktop wallpaper refresh while users are still logged on and when desktop wallpaper are centrally managed by Group Policies.  The process is not complicated but it’s not as straight forward as we would think initially.  The problem is that when the new desktop wallpaper image is distributed through Group policies to computers, the new image will not be displayed on computers where users are currently logged-on (even if a gpupdate /force command has been executed)

Using a Powershell script, we found out that it’s technically possible to refresh desktop wallpapers.  A logged on user executing the script would see immediately the new desktop wallpaper.  The most challenging part is to find a way to automate the execution of the script.  Multiple options exists such as scheduled tasks, login scripts, startup folder, windows service…. You have to choose the best option that would work for you….