Summer break has affected a little bit our work.  Some of us are enjoying well deserved Holidays far away from home while others are taking some rest and enjoy their family life… We all needed to get away from technology and recharge batteries.  Summer time means that not much has been happening on this blog..We didn’t publish a lot of information and posts lately. This break was really needed for some of us but it’s time to slowly go back to work and provide some new information, tip and tricks, step by step guides and more…

To get started, this post will focus on an easy topic…Canonical announcement around Ubuntu Operating system life cycle….

First information that has been made available and widely shared and distributed over the internet is that Ubuntu 18.10 has reached “End of Life”.  This means that this specific version will not get any updates and security fixes anymore.  Ubuntu 18.10 was not a LTS release but more of an interim version used for early adopters to see new features of the Ubuntu Operating system.  If you have been using Ubuntu 18.10 as your main operating system or if you company has deployed Ubuntu 18.10, it’s time for you to move ahead and get Ubuntu 19.04 installed. This will ensure that you will get the latest security fixes and patches for the Operating system. Again, Ubuntu 19.04 is an interim release. This means that in about 9 months, you will need to upgrade again to Ubuntu 19.10 and then move to Ubuntu 20.04 which would be the next LTS release.

Based on our experience, Ubuntu 18.10 has not been widely deployed. Actually, we were not big fan of this release and it was not really bringing much into the game.  When Ubuntu 19.04 came out, we have seen a lot of people moving away from Ubuntu 18.04.x and more specifically from Ubuntu 18.10 to test it.  The performance improvements and the look’n feel were the most common justification to move away from Ubuntu 18.xx editions.  So far, we have to say that Ubuntu 19.04 is providing a really good experience and people are actually enjoy this version

In the other hand, let’s be realistic, corporate environment would tend to stick to Ubuntu 18.04 because of the 5 years support provided by Canonical. People using Ubuntu at work tend to stick to the LTS releases because they know for sure that the programs and software they are using will still continue to work and they have time to prepare for the next LTS release (Ubuntu 20.04) so they can adjust their infrastructure and their solution….

Ubuntu 18.04.3 Point release should be coming soon.  Based on the info found on Ubuntu Wiki, we can see that the next Point Release should be made available in August 2019. 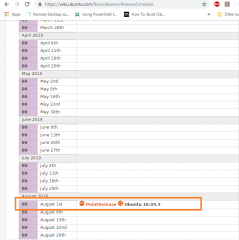 What’s an Ubuntu point release, you might ask ?  It’s comparable to Service Packs in Windows world.  Point Releases are basically new images containing the latest security fixes and patches for LTS edition that are published on Ubuntu web site.  So, for new deployments, using Point releases approach reduces the time necessary to download and install patches available for Ubuntu (because already included in the Point Release).  If you have kept your Ubuntu 18.04 version up to date, you will automatically move to Point Release 18.04.3 and there is no need to perform any actions.

Canonical is working on the next version of Ubuntu (i.e Ubuntu 19.10) and should be released as usual somewhere October 2019.   Ubuntu 19.10 (codename “Eon Ermine”) might attract a lot of attention.  This interim release is the last one before the next LTS release.   Ubuntu 19.10 could provide a peak preview on what to expect in Ubuntu 20.04.  To be honest with you, we do not know really what this LTS version would bring but we are hoping that this version would be one of the best released provided so far.

Canonical was planning to drop 32-bit support starting from Ubuntu 19.10 but have reconsidered this decision.  Initially, I think that a lot of people were welcoming this decision.  Ubuntu (and Linux in general) has evolved quite a lot and it should be seen as a modern operating system that can be installed on a modern laptop or workstation.  All these modern hardware devices should be supporting 64-bit version of the Operating system.  Dropping 32-bit version would have helped in focusing on the 64-bit version and would have speed up (possibly ?) the development and integration of new features.

However, Ubuntu being quite popular as operating system, Canonical didn’t take into account that other important software maker were relying quite heavily on 32-bit libraries.  Based on our readings, Wine an Valve were among the most important organization affected by this decision.  Finally, Canonical came up with a middle way solution.  32-bit repositories would be made available in Ubuntu 19.10 and later in order to still support gaming software and Wine Emulator.

This was really a quick overview of what to expect in the coming months from Canonical.  We know that Ubuntu 18.10 has reached end of life, that Ubuntu 19.10 is under development and should be made available in October 2019 and that a Point release (18.04.3) should be released in August 2019.   These news have a direct impact on our work.  For example, Point releases and interim release might introduce some changes that might break our famous xrdp installation scripts.  So, we have to start preparing the work around these new releases….

Speaking about xRDP scripts, we are working on something new and some information should be made available in a few days/weeks….