As you are probably aware, Canonical has released its short term release (STR) version Ubuntu 22.10, codename Kinetic Kudu, on October 19, 2022.  This release does not seems to bring major changes.  Ubuntu 22.10 is still introducing some changes such as Gnome Shell 43, PipeWire Sound Server, new look’n feel settings which definitely bring some improvements but not really major changes.

Since a lot of people wrote already a lot about Ubuntu 22.10 features, we will try not to repeat this information.  What we will do is quickly going through the small changes that we have noticed already with this new release and see how these changes might impact our xrdp-installer script.

Ubuntu 22.10 has been released in October 19, 2022 and it’s time for us to check what’s has changed and how these changes might affect our famous xrdp-installer script.  Indeed, each time a new Ubuntu release is out, we are trying to update our xrdp-installer script to include support for the new release but we also test and validate the script to ensure that the new version does not break the installation process.

Ubuntu 22.10, being a STR (short term release), we are not expecting major changes that would prevent the xrdp-installer script to run and allow you to perform remote desktop connections.  However, some changes made in Ubuntu 22.10 are impacting xRDP software package and might impact some installation feature provided by our xrdp-installer script.

Nowadays, the main changes made in Ubuntu is related to the Kernel version and the Gnome Shell Version and up to date version of software.  Ubuntu 22.10 is not exception to this rule. Ubuntu 22.10 ships with the latest version of Gnome 43 which brings indeed a number of improvements such as Quick Toggles, an improved Nautilus Utility, responsive design and latest version of most used software (Firefox, LibreOffice…)

The main visual change that has been introduced in this version is probably the Quick Settings or Quick toggles as shown in the screenshot below.  By clicking on the top bar, you will see that a number of additional options have been made available and allows you to quickly access most used features such as dark mode or sound or bluetooth settings…. 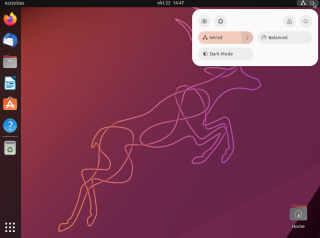 In the Settings application, there is a new Ubuntu Desktop tab that consolidating all the feature related to the Ubuntu Desktop settings you can manage.  This is a minor change but quite beneficial since now you just need to go to one place to configure your Ubuntu Desktop interface 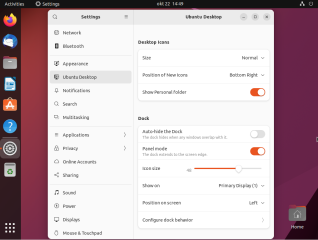 As in Ubuntu 22.04, Ubuntu 22.10 still offers the color accents option which provide an additional layer of customization of your Desktop interface. This change has been well received in Ubuntu 22.04 and heavily used. 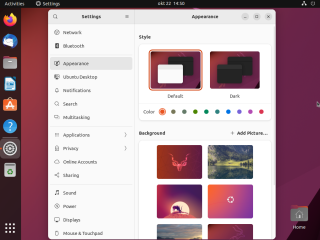 Gnome 43 has introduced some improvements into File manager (and to Settings Apps) which now dynamically get resized based on the windows size.  The general look’n feel of Ubuntu 22.10 and Gnome 43 is really smooth and all these small changes make the Ubuntu desktop quite responsive, modern and quite comfortable to work with

PulseAudio is not available anymore on Ubuntu 22.10 and has been replaced with PipeWire.  More and more distribution are slowly dropping PulseAudio Sound server in favor of the new kid in town i.e. PipeWire.  PipeWire should bring better performance and should also improve bluetooth support on Linux world.  However, this change might affect other applications that were heavily relying on PulseAudio.

xRDP is using PulseAudio package in order to provide sound redirection capability.  xRDP does not seems to support Pipewire yet and at this stage the team behind the xrdp software is not really working on updating their software to support PulseAudio.  However, some discussions have started and maybe they might provides some more information about their decisions and a a possible roadmap….

A final comment about coming release of Ubuntu 22.10 is about Firefox.  We know that Ubuntu is pushing to use its own application portability software solution (i.e. snaps). A lot of people are wondering if this is the correct direction since other technologies seems to be available on the market and seems to have more attraction than snaps (Flatpak, Appimage). Ubuntu 22.04 is shipping by default the Snap package version of Firefox. A lot of people were not happy with this change mainly because the snap version was really slow compared to the traditional firefox package.

Canonical has made some great improvements in firefox performance issues in Ubuntu 22.04 and these improvements have been pushed forward in Ubuntu 22.10 which should make Firefox Snap more workable. Note however that, if you are really against Firefox as Snap, you can always uninstall it and install the traditional package version..

With this new release also, Canonical has announced that its Ubuntu Pro, the extended security maintenance compliance subscription, will be free for everyone up to five machines. The Ubuntu Pro offering basically allow anyone to obtain security patches for Ubuntu release up to 10 years.  This offering is available starting from Ubuntu 16.04 and above.  The offering also covers only Ubuntu LTS version obviously

So, if you have an Ubuntu 16.04 computer running (because of a specific application that cannot be used on more recent os version), by subscribing to the Ubuntu Pro program, your ubuntu 16.04 will get extended supported which means that you could keep your application and Ubuntu 16.04 running until 2026.

We have released a small script in the past that enable you to change the login script background look’n feel of your Ubuntu machine.  The latest version of the script (3.4) seems to work against Ubuntu 22.10 release. The script needs to be updated in order to include Ubuntu 22.10 support but all in all the utility is still working.  There are some side effects that are showing up which means that we will need to work on it and we might release an updated version of the script.

We have not taken our decision yet and the script will still be maintained for the moment….

Ubuntu 22.10 is shipping with xRDP package version 0.9.19  which is quite recent.  The latest version of the xRDP package made available by the package maintainer is 0.9.20.  As a reminder, xRDP package is a software that allow users to perform remote desktop connection to Linux machine using RDP protocol.

New Installer Still not there !

Ubuntu 22.04 was supposed to ship with a new Installer that would be based on Flutter.   This didn’t happen !  Ubuntu 22.10, being a Short term release, could have include the new Installer but this is not the case.  Ubuntu 22.10 is still shipping with the old Ubiquity Installer interface which works great and provide a familiar experience while performing the Ubuntu installation process.   There is a way to test the New Installer through a snap application but again the testing is just giving you the look’n feel but will not perform the actual installation.  Based on information found on Ubuntu Blog, it seems that the new installer might be on its way in the coming releases (we are expecting this for LTS Release Ubuntu 24.04) 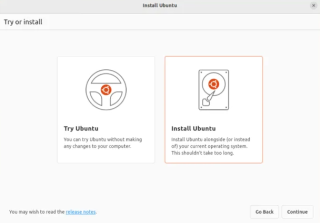 It seems also that Ubuntu is working on a new Software Center App store that will be using Flutter technology again.  Some information has been already made available on internet about this new software center applet.  This Software center app will be the official Snaps Applications 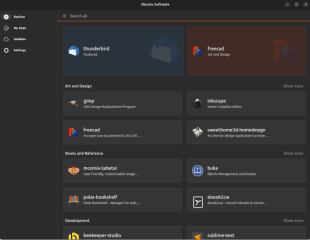 This is up to you and should be based on your infrastructure and based on your own assessment.  In Enterprise infrastructure, we have seen that Ubuntu 20.04 is still the most important OS deployed.  Ubuntu 22.04 didn’t got the expected momentum (due to probably firefox issue). The other consideration before moving to new release is application support.  Indeed, we have encountered a lot of applications not “officially” supported yet on Ubuntu 22.04 which has delayed deployment.   This is slowly changing…

If you want to deploy Ubuntu 22.10, remember that this is a short term release (9 months support) which means that you will need to update to the next release (kind of a rolling release). We will probably install one or two Ubuntu 22.10 in our network but nowadays I have to say that LTS releases is our focus mainly because of application compatibility and support….

Ubuntu 22.10 has been released on October 19, 2022 which does not bring really impressive improvements and features but brings really nice refinement and improvements.  Release after release, Canonical is offering a more than capable operating system solution that can replace mainstream Operating Systems like Windows or RedHat or Oracle.  Ubuntu has really become a stable, rock solid distribution that has attracted interest from companies like Dell and Lenovo.  All in all, Ubuntu 22.10 seems to provide really a more than pleasant experience in term of visual Aspects and performance.

The only recurring question that we see coming over again is about the snaps technology….Snaps is kind of controversy topic since not everybody is supporting and happy to transition to this technology.  This is a philosophical  choice…and future will tell if the technology is good and widely adopted…or not

In the coming weeks, we will release the next iteration of the xrdp-installer script that will support Ubuntu 22.10... So, stay tuned