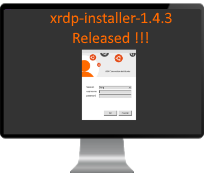 Holidays are coming soon and we are still working on the xrdp-installer script.  We are happy to let you know that a new release of the famous xrdp-installer-script is available for you to test and download.  Initially, the script was focusing on Ubuntu+ Gnome desktop interface.  However, based on feedback and requests from users, we are trying to support more distributions (still not perfect but work in progress). Version 1.4.3 brings some minors features/improvements and fixes also some minor bugs

Thanks to our readers  and more specifically thanks to Hiero 🙂 who is really active lately and providing really good feedback and share good ideas in order to improve the script.

The new version of our famous xrdp installation script will be set to 1.4.3 (i.e. xrdp-installer-1.4.3.sh).  This script replaces all previous versions.

Credits goes to Hiero (one of our readers) for this feature.  Hiero contacted us recently and made an interesting suggestion in order to avoid the frequent issue with xrdp black screen symptom.   As you should know by now,  xRDP does not allow you to perform a local and remote connection using the same user account at the same time.  It’s either a local connection or a remote connection.  If you try to perform concurrent connections with the same account, you will end up with a black screen.  Some workarounds exists but we do not recommend to use them as they can also introduce some other issues… You can find more information at

Hiero came up with the idea to introduce a warning message box when performing your remote desktop connection.  The popup would show up only if the user trying to connect via RDP is already logged on locally on the Ubuntu machine.  After integrating his code into the script, we have tested the functionality.  So, if a user has already an existing local connection on the computer, when he will perform the remote connection, he will get the following message 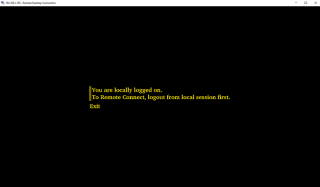 This is a nice little addition.  In the future, we might want to perform the same kind of check (if possible) when a user is remotely connected via xRDP and tries to login locally.  As you can imagine, the same symptom/behavior will occur.  When login locally (while already logged remotely), only a black screen will be show to you…. We might want to have the same kind of warning message implemented but we have no timeline yet….

Since some readers reported some issues when running sound redirection from different distribution flavor, we have noticed that no error handling was available in the sound redirection code section.  To overcome this limitation, we have slightly modified the code to have a really basic (quick and dirty) error detection system. The idea here is to simply notify the user if there is a problem during the execution of the script.

To find the root cause of the issue, you will still need to have a look into the output provided by the script which can probably provide you hints on why the sound redirection installation didn’t work as expected.  Again, really a minor change but might help increase awareness in case of problem with sound redirection compilation process….

Our focus is on Ubuntu + Gnome Desktop and based on several tests we have made, it’s seems that this version of the script is running ok and sound redirection should be working fine.  If you have different distributions, please give it a try and provide feedback.  If you find that something is not working as expected, let’s us know and we will try to fix this… 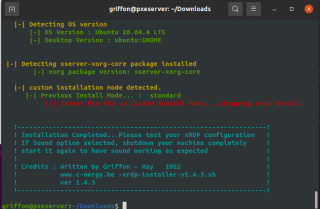 The xrdp-installer-1.4.3 script will work in a similar way as the previous versions. The following section will explain how to download, extract, set executable mode and perform the installation using the script.  The script provides some switches that can be used to customize the installation process.

The xrdp-installer-1.4.3.sh script will support the following Ubuntu operating system version assuming that Gnome Desktop is the default Desktop interface

The xrdp-installer-1.4.3.sh script can be run against the following Ubuntu flavors but we cannot guarantee that everything will work as expected (best effort)

Download the xrdp-installer-1.4.3.sh script to your system, extract content and mark it as executable . To do this, perform the following action in a terminal console

Note : Adjust the path where the xrdp-Installer-1.4.3.sh script to reflect your environment

The xrdp-installer-1.4.3.sh script can be executed as is (with no parameters or switches). This will perform a standard (and basic) installation of xRDP.  No sound or custom xrdp login script will be made available.  However, remote desktop, drive redirection and clipboard redirection would be available with this installation mode.

The xrdp-installer-1.4.3.sh script accept also some additional parameters that will help customize the xrdp installation and enable additional features.  The script provides the following parameters

The script version has not been tested extensively but we hope that the minor changes we have introduced will not cause any additional issues.  We wanted to release this version mainly because of the nice little addition about the warning message when concurrent connections from the same user exists.  This is really a useful one. Hiero has also shared some other ideas in order to improve support to other distributions.  This would be our next step.. reviewing Hiero recommendations & ideas and try to integrate them into the script. This might show up in the next version of the script….

Thank you to Hiero for all the positive feedback provided so far and thanks for sharing your findings and suggestions…This is really highly appreciated…. 🙂