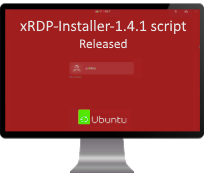 In our previous post, we have notified you that some issues have been detected in the script version 1.4.  The detected issue looks really minor and in order to tackle this issue, we have decided to release an updated version in order to fix the small bug/issue detected.   The new version of our famous xrdp installation script will be set to 1.4.1 (i.e. xrdp-installer-1.4.sh).  This script replaces all previous versions.

Please note that most of the tests have been done on Ubuntu 22.04 with Gnome Desktop Interface and Debian 11.

Please also note that this update only tackle the detected issue when installing against Ubuntu 20.04.  Version 1.4.2 is being worked out as well to tackle the necessary improvement for the scenario where installation is performed via ssh session….Version 1.4.2 will be released at a later stage (probably a few weeks from here)

The xrdp-installer-1.4.1.sh script ease the installation and post-configuration actions of xRDP on top of Ubuntu Operating System but also against Debian Distribution.  This release is really a minor update and aim to fix a small issue that has been detected by multiple users

As explained in our previous post,  the xrdp-installer-1.4 running the custom installation mode fails.  After reproducing the error, we have been able to detect the issue and provide a quick fix for it.  This fix has been actually provided by multiple users that have encountered the issue.  Thank you to them for sharing their findings  🙂

The xrdp-installer-1.4.1 script will work in a similar way as the previous versions. The following section will explain how to download, extract, set executable mode and perform the installation using the script.  The script provides some switches that can be used to customize the installation process.

The xrdp-installer-1.4.1.sh script will support the following Ubuntu operating system version assuming that Gnome Desktop is the default Desktop interface

The xrdp-installer-1.4.1sh script can be run against the following Ubuntu flavors but we cannot guarantee that everything will work as expected (best effort)

Download the xrdp-installer-1.4.1.sh script to your system, extract content and mark it as executable . To do this, perform the following action in a terminal console

Note : Adjust the path where the xrdp-Installer-1.4.1.sh script to reflect your environment

The xrdp-installer-1.4.1.sh script can be executed as is (with no parameters or switches). This will perform a standard (and basic) installation of xRDP.  No sound or custom xrdp login script will be made available.  However, remote desktop, drive redirection and clipboard redirection would be available with this installation mode.

The xrdp-installer-1.4.1.sh script accept also some additional parameters that will help customize the xrdp installation and enable additional features.  The script provides the following parameters

Please if you have time or want to help us in creating the best xRDP installer script, download the script, test it and provide constructive feedback.  If you find a bug or an issue with the script, let us know as well so we can try to fix it.     As a reminder, the code to perform the installation via ssh session is being re-worked and a new version of the script will be release soon providing better ssh support