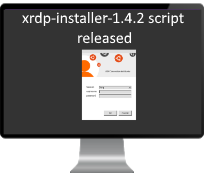 Thanks to our readers  and more specifically thanks to Hiero :), the problem was acknowledged and the root cause identified.  So, this new release of the script is including the fix and sound redirection should be working again with no need to tweak your system.

Version 1.4 introduced the possibility (still experimental mode!!!) to perform the xrdp installation via ssh session.  The “experimental” code  was quite basic and after performing additional tests we have noticed that this code could introduce other issues and needed some improvements.  We have also acknowledge that this installation option (i.e. via ssh) seems to be used in a number of scenario, so we have decided to revisit this part of the code to improve it….The script version 1.4.2 will provide an updated version of the ssh installation method….

The new version of our famous xrdp installation script will be set to 1.4.2 (i.e. xrdp-installer-1.4.2sh).  This script replaces all previous versions.

As explained earlier,  the xrdp-intaller-1.4 version of the script was introducing a new option that would allow a user to perform the installation via an ssh connection.  However; after some more detailed tests, we have noticed that this option was not always working.  Some improvements were needed here.  Version 1.4.2 is really focusing on improving the installation process over the ssh session.   Probably, the solution is still not perfect but it’s definitely an improvement.

In this version of the script,  we are also introducing some additional support (i.e Best effort)  for

In this version of the script, we have decided to already remove  support for  some other Operating system and more specifically

xrdp-installer-1.4.1 (and probably version 1.4) was breaking the sound redirection.  The script was basically rebuilding too much related to the Pulseaudio sound server and some service configuration file were updated wrongly.  Based on some user feedback, we have indeed noticed and confirmed that the sound redirection was not working anymore. To fix this, a user could simply issue in the Terminal console, the command

and this would make the sound redirection working again within your remote session…  (but obviously this is just a workaround!!!)

After reviewing the script and the comments/findings from one of our reader (Thanks Hiero), we have indeed found that one action of the script was triggering this behavior.  We have been able to fix it quite quickly (commenting the line causing the issue 🙂 and now sound redirection should be working just fine.

A major change is coming in modern Operating Systems.   Pulseaudio software is being replaced by a newer version package called Pipewire. This will have an major impact also in the xRDP software a more specifically sound redirection feature.  So far, xRDP Sound redirection can work only when Pulseaudio package is installed.  This means that operating system like Pop!0S 22.04 and the coming Ubuntu 22.10,  which are ditching Pulseaudio in favor of Pipewire, will not support sound redirection anymore.

The xRDP team has no plan (so far) about updating their code to support Pipewire solution.  Based on this new situation, the script version 1.4.2 introduces an additional check to detect if PulseAudio or PipeWire is used. Based on the software installed on the system, the xrdp sound redirection will go through if Pulseaudio.  If Pipewire is installed, sound redirection compilation will not be performed.

The xrdp-installer-1.4.2 script will work in a similar way as the previous versions. The following section will explain how to download, extract, set executable mode and perform the installation using the script.  The script provides some switches that can be used to customize the installation process.

The xrdp-installer-1.4.2.sh script will support the following Ubuntu operating system version assuming that Gnome Desktop is the default Desktop interface

The xrdp-installer-1.4.2.sh script can be run against the following Ubuntu flavors but we cannot guarantee that everything will work as expected (best effort)

Download the xrdp-installer-1.4.2.sh script to your system, extract content and mark it as executable . To do this, perform the following action in a terminal console

Note : Adjust the path where the xrdp-Installer-1.4.2.sh script to reflect your environment

The xrdp-installer-1.4.2.sh script can be executed as is (with no parameters or switches). This will perform a standard (and basic) installation of xRDP.  No sound or custom xrdp login script will be made available.  However, remote desktop, drive redirection and clipboard redirection would be available with this installation mode.

The xrdp-installer-1.4.2.sh script accept also some additional parameters that will help customize the xrdp installation and enable additional features.  The script provides the following parameters

This is it for this post !   We are happy to provide an updated version of the xrdp-installer script that will improve user experience also when you perform the installation via an ssh session.  The fact that Pulseaudio is being replaced with PipeWire will affect the xrdp sound redirection and if xRDP team is not planning to update their code, we might also need to slowly remove the sound redirection switch from the script… We will see what the future brings…