Today’s post is again about xRDP software solution.  xRDP is a Linux based software solution that provide remote desktop services capabilities.  After installing the xRDP software layer on a Linux based computer, a user can access the desktop remotely through the RDP protocol. This means that a user working on Windows can access remotely a linux desktop with no need to install any additional software.

If you are a regular reader of this blog, you problaby know that have been explaining in simple ways how to perform the xRDP installation.  However, some of our readers are also wondering how to remove the xRDP software from their machine.  This question arise usually when there is a problem with the xRDP installation and people want to try from scratch or when they give up… This post will explain how to remove the xRDP software based on the way you have performed the installation..

Let’s quickly see how to perform such easy task….!

Removing xRDP based on installation process

Remove it when Standard installation has been performed

xRDP – How to Install on Ubuntu 17.10 -Manual Installation

xRDP – How to Install on Ubuntu 17.10 – Automated Install

Before removing xrdp package, the first step would be to stop the service by issuing the following command in a terminal console

When using the standard installation procedure, it’s really easy to remove the xRDP package from your computer.  The command that you have to issue is basically the following

This command will remove the packages but configuration files will not be deleted.

To remove packages and any configuration files, you should run the following command 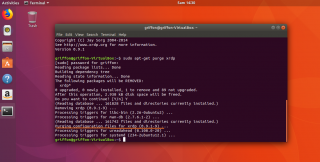 In the screenshot, you can clearly see that configuration files are deleted as well.

You can then reboot your machine and you should not have any xRDP software solution available on your system.  You can then either, try to re-install it if you had problems or use another remote desktop solution….

Remove it when Custom installation has been performed

Then, you can remove the systemd service for xrdp by issuing the following command

Reboot your system so you have a really clean system at this stage….

Remove it when Custom installation (with checkinstall) has been performed

If you have been adventurous and you have tried this approach (see this post), the uninstall process is quite easy. Using the checkinstall command when compiling from source makes really easy to remove and re-install the compiled package. checkinstall will basically create a debian package and you can use the standard dpkg command to remove or re-install xrdp software…

then you can issue the following command to remove the debian xrdp and xorgxrdp package created by the checkinstall from your system.   If you have followed the instructions describe here for the checkinstall, your deb packages are located under ~/Downloads/xrdp and ~/Downloads/xorgxrdp…

To uninstall the xrdp package, you would simply issue the following command in a terminal console

To complete the uninstall process, you also need to remove the xorgxrdp package by issuing the following command 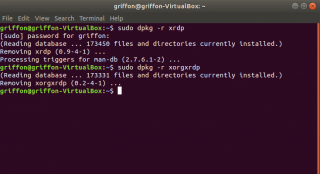 Finally, you can remove xrdp service from the systemd. This is optional but if you want to have a clean system you might want to issue this command

Reboot your system and check that you cannot remote connect anymore through rdp client.

This post was due from a long time but I just recently found the time to write it.  Nowadays, the installation process for xRDP is so straight forward that we hope that this post would not be used too often. On the other hand, we are happy to have written this one so xRDP information is becoming quite complete..