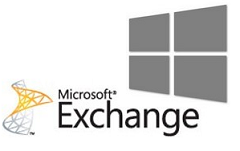 Recently, I’ve been called by a customer to provide some help and guidances about installaing Exchange 2010 in a domain where the name was using an underscore.  Another company has been hired to perform a migration project from exchange 2003 to Exchange 2010.  The company ran the Exchange Best Practice Analyzer and fixed all the issues they would have found.  That was time to perform the installation of the Exchange 2010 server.  The consultancy company overlooked a small detail : the name of the domain contained an underscore

Have you have tried to install an Exchange  2010 in a domain where the domain name contains an underscore ?  If you have already tried this kind of operation, you probably know the final result.  The installation would fail miserably. That’s exactly what happened during this migration project. During the pre-requisites checks performed by the setup routine, the following error was thrown (see screenshot below) and the installation process failed. 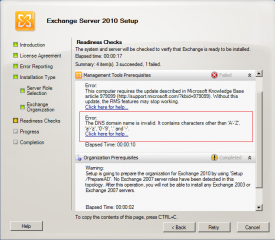 To workaround the problem, the other company decided to add an additional domain in the forest (creating a domain tree structure). Because the new domain was not using any invalid characters, the installation procedure was successful.  Obsviously, this solution was valid and would be supported by Microsoft.  However, the customer was not happy with such solution simply because of the additional level of complexity that was added into the Active Directory infrastructure.

My assignement during this small consultancy job was to come up with an alternative to the current implementation.  The customer wanted to get back the Single Forest/Single Domain infrastructure and still have Exchange 2010 installed. In fact, it exists another option that would allow you to install an Exchange 2010 in a domain with an underscore.  The option is the Disjoint namespace approach

This scenario is fully supported by Microsoft and not too complex to implement.  Using this approach, we are basically getting rid of the underscore character in the dns name and the installation of Exchange 2010 should go through.

for more information about Disjoint Namespaces, visit this link

Before installing your Exchange 2010 server, you will need to perform some configuration changes within your Active directory Forest.   This section will describe the modifications that have been performed in order to implement this disjoint namespace scenario.

Step 1 – Create a DNS zone for the disjoint computer.  In this example, we will create a new zone called domainName.lab (no underscore).  We perform this step in order to have name resolution working in such scenario.

Step 2 –  Configure Active Directory to accept multiple DNS suffixes.  Using adsiedit, you connect to the default Naming context, expand it and right-click on the top level of you domain.  In the Attribute dialog box, locate the attribute called msDS-allowedDNSSUFFIXES and enter the DNS Suffixes for your domain. 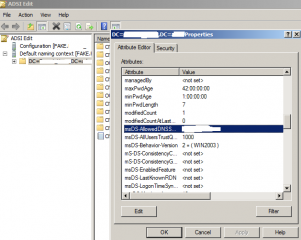 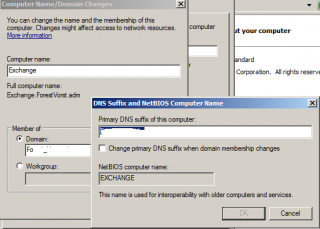 Step 4 – Change the DNS Suffix. Right-click the network interface,select  properties and then select internet protocol v4, click on properties. In the TCP/IP Properties page, click on Advanced, go the DNS tab, and there append dns suffixes to be used.  Here, we have done it manually but in production you will use a Group policy to set this setting through your organization. When done, close everything 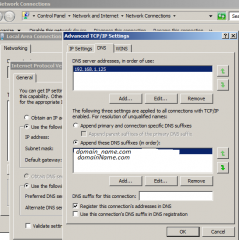 Step 5  – Install Exchange 2010 on your computer.  As you can see, the setup wizard will go through given that the DNS name of the computer does not contain anymore invalid characters (underscore) 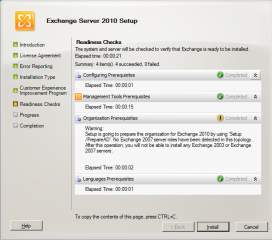 And Voila !  Using this special configuration, we have been able to install the Exchange 2010 into a single forest/single domain even if the domaine was using a underscore.  The customer was pleased with this solution because he went back to its original situation.  However, after this consultancy job, the customer was already looking forward and was planning to perform a inter-forest migration in order to bring its current (and obsolete) infrastructure to Windows 2012/Exchange 2013 environment.  If I get the job, I might post something about inter-forest migration