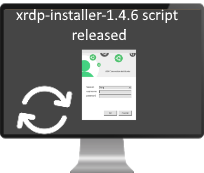 In our previous post, we have mentioned a bunch of issues that have been encountered when using the xrdp-installer script (ver. 1.4.5).  Since the issues detected are quite significative, we have decided to release (quick and dirty) a new version of the script which should tackle the most important issues detected.  This script replaces all the previous versions

The new version of the famous xrdp installation script will be set to 1.4.6 (i.e. xrdp-installer-1.4.6.sh). Version 1.4.6 should be seen as an emergency release in order to quickly fix the detected issues.  We will need to perform some additional tests to validate the script and then mark it as stable

Initially, the script was supporting only Ubuntu with Gnome Desktop interface. However,  recent version of script tries to detect the Desktop interface in use and try to perform the post-configuration actions as required.  Recent version of the script also can run against Debian Operating system as well.  Please note that supporting other Flavors is based on a Best effort approach

Fixing package conflict between fuse and fuse 3 on Ubuntu 22.10″

As explained in our previous post, Ubuntu 22.10 ships with fuse3 package by default.  When performing a custom installation, the script will try to install fuse package.  The fuse package conflicts with the newer fuse3 package and some important packages are removed from your Ubuntu machine (such as ubuntu desktop !!).  The xrdp-installer-1.4.6 will not try to install fuse package anymore. Instead the libfuse-dev package will be installed when performing a custom installation

The xrdp-installer script can perform a standard installation (i.e. using Ubuntu packages from repositories) or a user can decide to run a custom installation from sources files.  In the previous versions of the script, when custom mode was selected, the script would download files from the Github dev branch repository.  Some users pointed out that they would prefer to use the latest releases versions rather than dev versions on their systems.  I think that these users have a point.  This is why in version 1.4.6, the script will always try to download the latest release version sources files.

Our famous reader Hiero has also made a small suggestions in order to improve sound redirection.  xRDP supports mp3 codecs in audio redirection via LAME encoder.  This feature can help reduce network traffic and improve sound quality.  So, now when we use custom install mode and we compile the xrdp package, we pass the  –enable-mp3lame which will include the mp3 support to xRDP software

We have not fully tested this featue and we still need to see if this improve xRDP sound redirection feature….

Some users have reported that the custom installation was not working on Debian OS. The error was caused by the checkinstall package that is used to compile xrdp and xorgxrdp software solution.  We have installed Debian 11.6 and run the script 1.4.6.  We have not encountered the issue (so far ?). If you are using Debian OS, if you have time, please give it a try and provide feedback

The xrdp-installer-1.4.6 script will work in a similar way as the previous versions. The following section will explain how to download, extract, set executable mode and perform the installation using the script.  The script provides some switches that can be used to customize the installation process.

The xrdp-installer-1.4.6.sh script will support the following Ubuntu operating system version assuming that Gnome Desktop is the default Desktop interface

The xrdp-installer-1.4.6.sh script can be run against the following Ubuntu flavors but we cannot guarantee that everything will work as expected (best effort)

Download the xrdp-installer-1.4.6.sh script to your system, extract content and mark it as executable . To do this, perform the following action in a terminal console

Note : Adjust the path where the xrdp-Installer-1.4.6.sh script to reflect your environment

The xrdp-installer-1.4.6.sh script can be executed as is (with no parameters or switches). This will perform a standard (and basic) installation of xRDP.  No sound or custom xrdp login script will be made available.  However, remote desktop, drive redirection and clipboard redirection would be available with this installation mode.

The xrdp-installer-1.4.6.sh script accept also some additional parameters that will help customize the xrdp installation and enable additional features.  The script provides the following parameters

In the past, we have provided some workarounds that could be used to allow multiple connections for the same user.  However, in Ubuntu 22.04, we have encountered some additional issues and again we strongly recommend not using these workarounds…..

Some workarounds (provided as is) to try to fix the issues are available. We do not recommend to use them ! Use at your own risk !!!

The script version has not been tested extensively because we needed to fix quite quickly the discovered issues.   The script should be seen as an emergency release in order to maintain usability.  Please if you have time or want to help us in creating the best xRDP installer script, download the script, test it and provide constructive feedback.  If you find a bug or an issue with the script, let us know as well so we can try to fix it.

Last but not least !  Special Thanks to Hiero who discovered and shared the information with you… Really appreciated  🙂