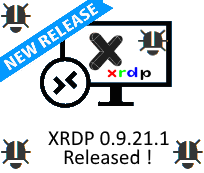 This will be a quick post related to xRDP  & availability of a new release.

So, as you should know by now, xRDP team tends to release new version every 3 to 4 months and make the release cycle predictable. The last release was around Sept 2022 and the release version was 0.9.20. So, we were expecting some new releases in January 2023.  However, we have been notified that a new release is already available since December 10, 2022.  The latest version of the xRDP is set to 0.9.21.x and tackle a number of security issues (mainly buffer overflow)

xRDP is a software package that provide remote desktop capabilities against a Linux machine and mimics the Remote Desktop capabilities that can be found in Windows Operating system.  Using xRDP, you can basically use your standard remote desktop client on Windows or Linux and you can remotely access your Linux Desktop interface.   The team behind the software is releasing on regular basis updates. These updates can introduces new features and/or can address security issues.

The release 0.9.21.0 is tackling a number of security issues that have been reported.  This update is recommended for all users that are running previous versions of xRDP package.   We are providing for your information the different security fixes that the release 0.9.21.x is fixing

Version 0.9.21.1 is really a minor update that includes a fix for users that want to build the xrdp package on a distribution other than Arch,Debian,SUSE,Red Hat,FreeBSD and macOsquired to use this release. This release will include the security fixes shipping with version 0.9.21.

Moreover, the script when using the custom installation mode will install binaries from the dev branch. (so you might end up with version number like 0.9.80).  A new version of the script is being worked out and will target the latest production release rather than the dev code. No time frame can be provided at this moment.. We have too many projects and activities ongoing….

As promised, this is really a short post but rather important.  Indeed, the xrdp team has made this latest xrdp release available (0.9.21.x) in order to fix a number of security issues  that you should be aware of.  If you are running a previous version of the package, it would be wise and recommended to install the latest version of the package.

Please note that the xRDP package shipping with your Ubuntu Operating system might not be the latest release version.  You will need to check if some updates would be made available by the OS provider.  If no updates are provided, you might want to build from sources and deploy the latest version of the xRDP Package…  At time of writing, Ubuntu is not providing any updates of the xrdp package as shown in their cve web page (see : https://ubuntu.com/security/cves?q=CVE-2022-23468)

We are working on a new version of the xrdp-installer script to tackle some identified (minor) issues.  When ready, this script release will install the version 0.9.21.x on your system