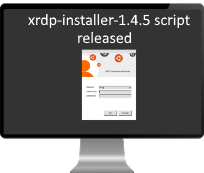 In our previous post,  we have described a problem that was affecting Linux Mint users  when running our famous script and trying to enable sound redirection.  Since this problem was reported by multiple users, we have looked into this and provided a quick workaround to enable Sound redirection (manual process).  Since we have identified the problem, it’s time for us to publish a maintenance release of the script in order to have a permanent fix and no manual intervention needed.

The xrdp-installer-1.4.5 script will basically ensure that sound redirection process completes successfully when used against Linux Mint machines. This is the only change that is included in this version.  Please remember/note that the script version 1.4.5 replace all previous and will work exactly the same way as previous versions.

So, let’s proceed and present the latest version of the script….

Initially, the script was supporting only Ubuntu with Gnome Desktop interface. However,  recent version of script tries to detect the Desktop interface in use and try to perform the post-configuration actions as required.  Recent version of the script also can run against Debian Operating system as well.  Please note that supporting other Flavors is based on a Best effort approach

As mentioned above, this script version is more a maintenance release that will tackle more specifically Linux Mint Operating System.  If you run the xrdp-installer-1.4.4.sh script against a recent Linux Mint machine and you have chosen to enable sound redirection,  you might end up with the following failure message 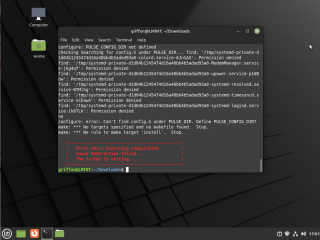 As explained in the previous post,  Linux Mint has its own way to get apt sources files (compared to other ubuntu based distribution).   Because of this, the sound redirection option does not complete successfully when running the script (and the -s switch option).   After identifying how the Linux Mint enable sources file feature, we have quickly modified the script in order to perform this step automatically.  The script will create an additional repo file and populated accordingly.  This is the only change that has been introduced in this version….

The xrdp-installer-1.4.5 script will work in a similar way as the previous versions. The following section will explain how to download, extract, set executable mode and perform the installation using the script.  The script provides some switches that can be used to customize the installation process.

The xrdp-installer-1.4.5.sh script will support the following Ubuntu operating system version assuming that Gnome Desktop is the default Desktop interface

The xrdp-installer-1.4.5.sh script can be run against the following Ubuntu flavors but we cannot guarantee that everything will work as expected (best effort)

Download the xrdp-installer-1.4.5.sh script to your system, extract content and mark it as executable . To do this, perform the following action in a terminal console

Note : Adjust the path where the xrdp-Installer-1.4.5.sh script to reflect your environment

The xrdp-installer-1.4.5.sh script can be executed as is (with no parameters or switches). This will perform a standard (and basic) installation of xRDP.  No sound or custom xrdp login script will be made available.  However, remote desktop, drive redirection and clipboard redirection would be available with this installation mode.

The xrdp-installer-1.4.5.sh script accept also some additional parameters that will help customize the xrdp installation and enable additional features.  The script provides the following parameters

The script version has not been tested extensively but we hope that the minor changes we have introduced will not cause any additional issues. Again, this script is mainly a maintenance release in order to include enable successful sound redirection feature for Linux Mint Users.