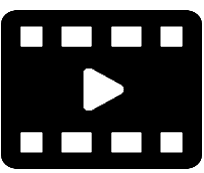 As mentioned in our previous post (see Ubuntu 20.04 – Updating the Change-Gdm-Background Script…- New version to come..), we have been working on updating the Change-Gdm-Background script.  The script will allow users to easily modify the login screen background of their Ubuntu 18.04 or Ubuntu 20.04 machine.  The script will be reaching version 3.0 and should replace previous versions of the script.

The script is not yet ready (for prime time) and we are still working on it.  However, we wanted to already share some videos and screenshot on how the script will work….. Since Ubuntu 20.04 is shipping with a newer version of Gnome Desktop, it took us a little bit more time to update the script.  Indeed, in previous version of Ubuntu, to change the login screen background, you simply need to modify a readable css file that’s used by the GDM process.  In Ubuntu 20.04, you still need to modify a css file but the gdm login screen settings are now stored in a compiled file.

Thank to our work with xRDP and Theme issues (see xRDP – How to Fix different lock screen colors in Ubuntu 18.04 remote session), we had already the way to go in order to extract resources, modify file as required, recompile them and apply the changes.  Based on this information, we have started updating the script.  We wanted to have something a little bit more friendly than a simple bash script.  So, we have decided to use the zenity software to create some GUI interface……

You will still need to start the script from a command line as a normal user (would be the recommended way..:-)). When the script start, you will be prompted with a dialog box that will ask you if you want to use a solid color for the login screen background or a picture to be used as background image 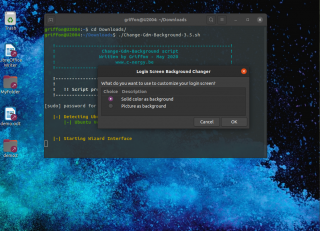 If you select the solid color, the color palette dialog box will show up and you can select your preferred color or the one that matches your corporate identity 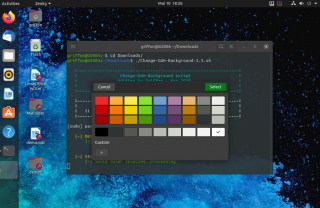 If you select a picture, the open file dialog box will open and you will be able to easily select from nautilus the image you want to use

Finally, you will be asked if you want to restart the GDM service or reboot the server.  This step is necessary in order to see the changes on your computer.  We recommend to reboot the server but if you can choose the option that would best fit your needs. 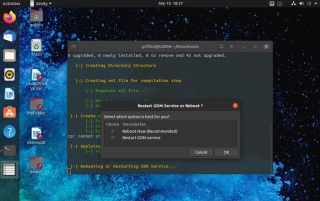 The default GDM login screen for Ubuntu 20.04 would look like the one depicted in the image below.  The color and general feeling is really a simple and clean login interface. 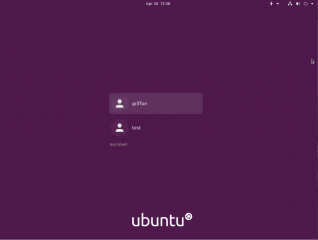 If you decide to change the login screen background (for whatever reasons), you should see something similar to the following pictures (ff the script was capable of modifying accordingly the gdm compiled file…) 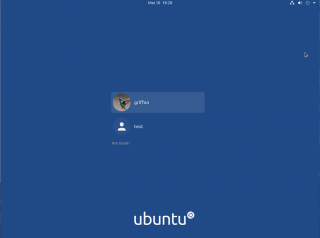 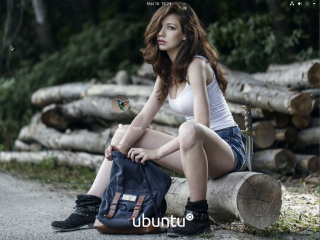 In this post, we are also publishing some (quickly created- so not perfect ) videos that shows how the script would work, how to use it and how the login screen would look like after the changes have been applied. A picture or video  is worth than hundred words (they say…)

As you can see, we are working on script that could be used to customize a step further your Ubuntu 20.04 operating system.   We will include in the script support for LTS Releases only (i.e. Ubuntu 18.04 and Ubuntu 20.04).  The videos shows a preview version of the script which means it might still be modified and some features might not be included.  Again, the script is probably not perfect and does not perform deep error handling process but it should be good enough to perform your customization.  We are looking in a way to revert back the changes in case something goes wrong…