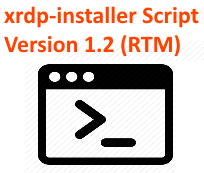 Version 1.2 is adding mainly support to Ubuntu 20.04.  As some people have already downloaded and installed Ubuntu 20.04, they have been asking to already get a peak preview of the new version of the script.

So, for the first time, we are already releasing the script (get it at https://www.c-nergy.be/products.html).  In a few days, we will also publish the updated (traditional) post explaining how to use the script.

In the mean time, let’s see what’s to expect….

As you know, each time a new Ubuntu release is made available, a new version of our famous xrdp-installer script is tested, validated and released in order to support the most recent version of Ubuntu Operating system.  The script has not changed dramatically.  You can still decide to perform a standard installation or a customer installation.  You can also enable some additional features such as custom xrdp login screen and sound redirection…  However, based on user feedback and some findings, some minor bugs have detected.  The version 1.2 script includes the following changes

Where to get it (RTM version) ?

You can find the RTM Version of the script at https://www.c-nergy.be/products.html.

The script is already available but we had not fully tested it.  The script seems to work really fine on Ubuntu 16.04.x and Ubuntu 20.04.  All the detected issues have been corrected. At the end, you should be able to connect to your Ubuntu machine through xRDP.  However, we have noticed some issues with the Drive redirection and the clipboard feature does not seem to work. Sound redirection is working but it’s seems that the bug described here is also affecting Ubuntu 20.04.  A manual action is needed in order to get it working properly.

When fully tested, (and if changes are needed), we will replace the RTM script with the validated version….

This is it for the moment !

This post was just announcing the availability of the xrdp-installer-1.2.sh script.  The script is marked as ready to manufacture (RTM) because we still need to perform some regressions on Ubuntu 18.04 and Ubuntu 19.10.  If you have time to test it against multiple versions of Ubuntu (16.04,18.04,19.10), please do and provide feedback or submit detected issues/bugs…. Use it at your own risk !!

The script usage has not changed since version 1.1. (instructions can be found here).  However, please do note that we are currently working on writing an updated version of this post specifically for version 1.2 of the script in order to have a consistent information.

Hope you would enjoy it