Proxmox ve Team has described one way to use the paravirtualized drivers (or virtio drivers) when performing a windows 2003 installation (see here for original instructions).  Because we want to bring some added value, we will show another way to perform the installation. This method will be described in part 2

This post will simply will explain how you can mount  a floppy driver into your kvm virtual machine and present mass storage drivers to the windows 2003 text based setup routine.

We will first create our virtual machine through the Proxmox Ve web interface.  You should ensure that the disk type and network Card is set to Virtio. (If you do not know how to create a kvm virtual machine, you can have a look here and here) 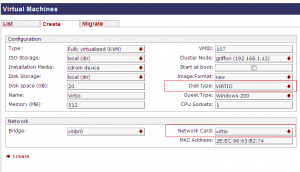 In the hardware tab, ensure that the windows 2003 iso image is mounted into the cdrom. 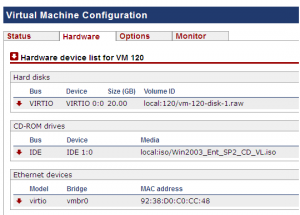 When you boot your virtual machine (configured to use Virtio Disks), the Windows Setup will stop because it has no information about the Virtio disks.  You will get message similar to this one

To perform this procedure, you will need to

You can download the virtio image from the Fedora project web site :   http://alt.fedoraproject.org/pub/alt/virtio-win/latest/images/bin/

You have to mount the iso image and extract the file virtio-win-xxx.vfd

You will then need to copy this file onto the host.  I’ve created the following directory on the ProxMox Ve host /var/vfd and copied the file over there.

# ps x | grep kvm | grep <VMID> (where VMID is the ID of the virtual machine where the floppy drive needs to be mounted ).  This will give you an output similar to the following screenshot

Note: you can find the VMID of a virtual machine in the web interface.

It’s time to perform our windows installation.  Open the vnc console.  If the setup of windows 2003 has already started, restart the virtual machine. When the Virtual machine reboots, press F12 and select boot from CD/DVD.  You will then see, press any key to boot from cd…. message.  Press any key and the setup wizard will sart.

When the Windows 2003 Setup starts, you have to press the F6 Key in order to be able to pass your virtio drivers to the setup routine.  You have to be fast because this screen does not stay forever. 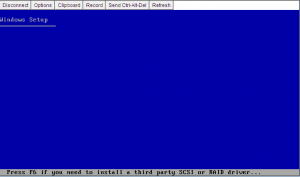 If you’ve been fast enough, you will see the following screen (see below).  Press S in order to be able to pass the drivers to the setup routine 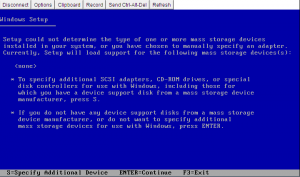 Based on your windows 2003 version, you can select the drivers that needs to be loaded into the system. Press Enter 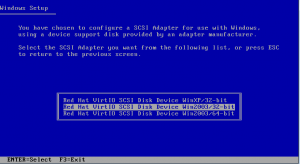 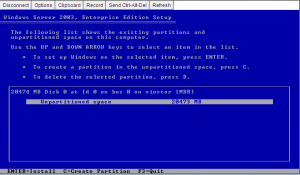 If everything happens as expected, you will be able to perform your windows 2003 installation.  Note however that during the setup routine (the GUI part), you might see some warning display boxes telling you that the drivers are not signed. Press Yes 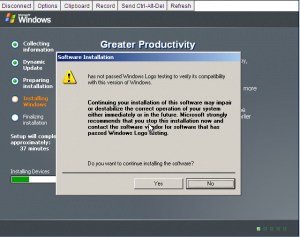 Finally, when your installation is completed, you will notice that the network card is not present within the operating system.  You will need to mount the virtio iso image and update the drivers for your network card. 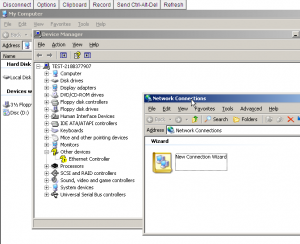 This post has demonstrated how you could perform a windows 2003 installation virtual machine from scratch that was configured to use Virtio Disk type and network card.  This method is working but requires a lot of small interaction with the user.  You need to copy the vfd file onto the proxmox ve server, you need to start the kvm machine from the console,… after the installation, you will need to install the drivers for the network card…. As I said, a lot of actions needs to be performed with this method…..

Because it’s becoming late…I’ll stop here for today.  But the next part of this post will show you how to create a windows 2003 iso image containing the virtio drivers and automate the installation process. With the “automated method”, you will need to prepare only once the windows 2003 iso image and you will be able to perform your kvm installation with virtio the same way you would do with IDE disk Type…

Stay tuned…. if you want to go the easy way

Till next time… see ya