It has been some time since I didn’t post any new article on this blog.  The reason is quite simple. I had no time as I was travelling and working on small but time intensive projects.  This also explains why it took me some time to answer to all the questions (but I answered to all of them).

This post will be quite short and simply announce that we are back and ready to blog again about our favorite topics.  One of the topics we might be focusing this year might be Ubuntu. Last year, the media were flooding us with news about how great Windows 10 was and all the new features and technology.  In the meantime, Ubuntu news didn’t showed up quite often in the news.  It seemed that everything was stopped… till recently. 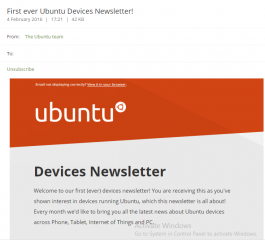 This shows that Canonical and Ubuntu have been working quietly during the last year to bring new exciting features and devices. This is a sign that work has been done.  A lot of people (even Ubuntu Supporters) were not convinced by the first attempt in having Ubuntu running on mobile Phones.  The experience was not that great and the hardware was also kind of limited.   (I do not know as I didn’t test the Ubuntu Phone yet)

Canonical is about to release new Phone devices (always from BQ and Meizu partners) with better specs. BQ will also make available the Ubuntu tablet on the market.  A lot of people thought that this would never happen as no progress on that topic was visible in the news.

The Ubuntu vision about convergence is also ongoing and news are telling us that show case will be performed to demonstrate this functionality.  Convergence feature is basically the capability to have a unified experience in using Ubuntu whatever the device you will be using (phone,tablet,computer)

So, as we can see and tell, there will be a lot of things to test this year and this is only one of the aspect of Ubuntu solution.  We do not speak (yet) about Openstack, Snappy,Charm and the rest… We think that really cool to have all these activities happening.  It took time but maybe Ubuntu will achieve its goal this year (in terms of convergence)

In a few weeks, the new release of Ubuntu (16.04) will be made available.  We have played around with the alpha version which still ship with Unity 7 (and not Unity 8).  As usual, we will post (quite quickly) a step by step instructions on how to install Ubuntu 16.04. We will then check if the xrdp solution is still working or if any improvements have been made.

We will try to blog a little bit more about Ubuntu this year. The reason behind this ?  We are performing a proof of concept where Ubuntu is used as replacement of Windows Vista machines.  Some of our customers and some of our internal people still have Windows Vista running.  There is no plan to upgrade these machines to Windows 10 or even 7.  The aim of the proof of concept is to see if an Ubuntu workstation can be usable and can coexist with Windows machines (servers and workstations) and see if the users adoption is good or bad.

Internally, we have already replaced two machines which are now running Ubuntu 15.10 and it’s working great even though we had some challenges in making everything working and interacting with some Windows Server. We will cover these topics in a future post as well.

As you can see, we are preparing a lot of stuff in the background.  We are ready to blog again about technology. This post was focusing on Ubuntu solutions but we will keep posting about Microsoft solution as well. We will try to cover the following topics as well this year :