Just a small note about UBUNTU. Since the 10-10-2010, Canonical has released the lasted version of their Operating system. 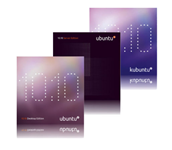 I haven’t download this latest version so far and didn’t read much about the improvement that this version brings.  The only interesting information I’ve got so far is that Ubuntu will be implementing gesture capabilities to the Operating System. This means that UBUNTU could be evolving to the tablet PC market.

Since the Ipad is out, a lot of constructors or startup companies are trying to enter into the game.  You have probably seen the Samsung galaxy Tablet, the Dell Table, the Archos Android Tablet,….  Ipad is a wonderful concept but everything is closed and people who want to customize stuff won’t be able to.

Canonical has been quite clear about that.  They will not produce any hardware devices and then load their Operating System for Tablet PC.  Canonical will simply focus on the development of the software and manufacturer can then decide to develop a tablet pc running Ubuntu.

We will see what the future will bring.