Update Note : This is not true anymore. You can use FreeNas to build up a ISCSI cluster with Windows 2008.

As you probably know, it’s possible to create a Windows 2008 Cluster using iscsi target. If you google a bit, you will see that the preferred iscsi software solution is the StarWind iSCSI softwared provided by the RocketDivision company.

StarWind iscsi target comes in 2 flavors. you can download the free version but support for clustering is not included. You can also dowload the 30 days trial version where it become possible to build up cluster. The problem is that the software can be used only for 30 days. Because of this limitation, i’ve tried to look for another solution…and to be honest that wasn’t a successful quest.

So, i prepared my environment in order to build my future Exchange 2007 Cluster. My servers were ready, my domain was setup and my iscsi infrastructure was also available and fully operational. The iscsi disks were available on the nodes of the future cluster.

With Windows 2008 Failover Clustering, you can validate the Cluster configuration. The tool will basically make some tests and check that your configuration is capable of running Cluster software on it. 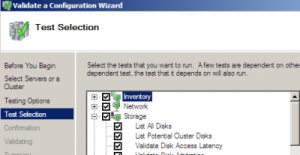 The tool ran and displayed some errors related to cluster disks. The error was saying something about persistent reservation. The picture below shows you an extract of the validation tool report. As you can see, the report clearly specify that Disk does not support Persistent reservation.

After some research, i found out that a cluster using iscsi disks, iscsi target must support persistent reservation. Neither OpenFiler, nor FreeNas seems to support this feature yet.

You can try to add storage disks to your cluster. The disk will be added but the disk within the cluster console will be shown as Offline. You can try to bring the resource online but it will fail anyway. This is because the iscsi disks does not provide persistent reservation.

As you can see, OpenFiler or Freenas cannot be used as iscsi target for Windows 2008 Clusters because they do not provide persistent reservation. This feature might be available in the next release as more people will encounter the problem. Starwind seems to be the only working solution so far.

Another option might exists but will not be applicable for all users. NetApp offer a simulator to their customers. This simulator can only be used in test environments. Netapp also support iscsi technology. I havn’t test it yet but it might be possible that the Netapp simulator can be used as iscsi target for a Windows 2008 Cluster. If somebody has made the test with NetApp, let us know….