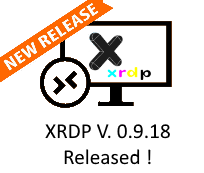 We are happy to let you know that a new version of the xRDP software has been recently released by the software solution maintainer.  xRDP team tends to release new version every 3 to 4 months and make the release cycle predictable.

As you probably know by now, xRDP software is basically the Linux implementation of the Remote desktop capabilities.   xRDP solution is based on basically 2 packages (i.e.xrdp and xorgxrdp) that have been recently updated and brings mainly bug fixing and some few new features.

Your Linux Distribution will usually not ship with the latest version of the xRDP package.  So, if you want to use the latest version of xRDP, you will need to compile the software from sources.  You can also use our famous xrdp-installer script that simplifies and automate the installation.  (see https://www.c-nergy.be/products.html).  However, we think that we will need to update the script to accommodate certain changes made in this release

You can find the releases notes for the xrdp, xorgxrdp and the pulseaudio-module-xrdp packages at the following location

Point of interest in this release can be summarized as follow

You can see that there is a number of bug fixes related to clipboard and drive redirection….. The fact that the pulseaudio xrdp module compilation process might have changed means that we will need to spend some time to assess, learn and adapt our xrdp-installer script…

Since there is a new release of the xrdp package, xorgxrdp package and more importantly the change in the pulseaudio-xrdp-modules release,  we will need to review our current xrdp script and see if there is a need to adapt it in order to get the latest features and bug fixing available.  So, now you can imagine the amount of work in front of us….. A new release of Ubuntu will be soon available (i.e. 22.04),  xrdp software has released new packages and some are introducing important changes….. we will need time to integrate this in our next iteration of the script….This might not be an easy release (since we have so much work to do)