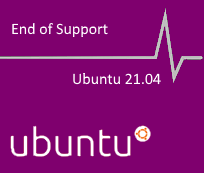 This the time of the year where we publish a recurrent post about Ubuntu Lifecycle and support.  As you probably know (or as you should know), Ubuntu 21.04 is reaching End of (standard) support in January 2022.   This means that in a few days, your Ubuntu 21.04 operating system will not receive any updates and it’s time to decide what to do with your Ubuntu machine.

As you probably know by now, Ubuntu 21.04 (coded name Hirsute Hippo)  is about to reach end of Support in January 20, 2022 !  This simply means that you will not be receiving any updates and patches for this release which puts your machine at risk.  It’s strongly recommended to upgrade your Ubuntu 21.04 machine to a supported Ubuntu version where support is still offered.

You have obviously multiple options here.  You could decide to decommission your Ubuntu 21.04 machines and deploy the latest LTS Version of Ubuntu (i.e. Ubuntu 20.04) or you can simply upgrade the Ubuntu 21.04 to 21.10 which will be supported till July 2022.   This approach would be probably the easiest option if you still want to keep features introduced in Ubuntu 21.04 but also to benefit from the new features included in 21.10

Upgrading to Ubuntu 21.10 would be also a good move if you or your enterprise is planning to move to the next LTS release version (i.e. Ubuntu 22.04) that will be released in April 2022.   Since Ubuntu 21.10 will be supported till July,  you would still have some time to test, validate and check application compatibility against Ubuntu 22.04 before mass deploying it.

In our cases, we will probably stick with Ubuntu 20.04 for now as the main operating system.  We will slowly introduce Ubuntu 22.04 when point release 1 will be made available.

At the moment, we are not planning to upgrade the xrdp-installer script (which is currently set at version 1.3).  This version still includes support for Ubuntu 21.04 even if this version is out of support.  The version 1.3 already include support for Ubuntu 21.10.  So, people willing to migrate (or perform clean install) to Ubuntu 21.10 will still be able to use our famous script and get xRDP Software ready for use.

We are slowly preparing the next iteration of the script in order to include support for Ubuntu 22.04.  At this stage, there is no preview version available since we are still investigating which features and code fixing will be included in the next version…

It’s time to say goodbye to Ubuntu 21.04 !  All in all, the release might not have seen spectacular features, it delivered what user expected :  stability, familiar way of working while still introducing some changes and new features such as

Again, some people might think that Ubuntu has become a boring distribution but you have to admit that Canonical has done a great job in providing a consistent and pleasant user experience and in simplifying interoperability with Active Directory.   We are looking forward to the next LTS iteration of Ubuntu….