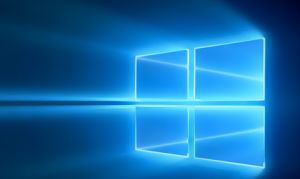 As you have probably noticed I have been quiet about the over publicized release of Windows 10 and all the new features available with it.  We didn’t want to provide information about windows 10 because a lot of sites were providing this information.

Lately, Microsoft is always releasing news about their products, events ,issues… Microsoft has succeeding in creating the buzz around their new product and their new service provider strategy in the news.  Microsoft is cool again….

Windows 10 is Free but not for everybody

Now that Windows 10 has been released, we have to start looking at it as customer and people are asking about features and possible issues with Windows 10.

We have a lot of Business customers asking about Windows 10 free upgrade process.  Windows 10 is not free for everyone. Windows 7/8 Enterprise Editions are not part of this free upgrade.  The upgrade will be part of your Select Agreement with Microsoft which means that you will need to pay to have it.

So, if you have deployed Enterprise edition, forget about getting the free upgrade.

Home Users and the Free Upgrade

If you are using a non Enterprise Edition, then yes, the Windows 10 upgrade is free if you are running Windows 7 or Windows 8.x operating system.  This sounds to good to be true, right ?  The fact is that indeed windows 10 is free but given the new Microsoft Strategy to offer windows as a service, you will need to pay in one way or another.

Microsoft wants you to use their free operating system (Windows as a Service) and make money on the online services like Office 365  for example.  Windows 10 has removed a bunch of software that used to be included in the Operating System. Media Center is available as a paid software. Some games like Solitaire will not be free anymore but you will need to buy a subscription to use it.

With your free Windows 10, you will get automatic updates but you might get also sponsored content (such as games).  These content can be removed but by installing windows 10 you agreed to have this annoying download occurring on your system.

Finally, Windows 10 is the most intrusive Operating system that Microsoft has delivered. Some people can argue that google or apple is doing the same which is true.  But we think it’s the first time that Microsoft is going that far.  There is also a long debate about Privacy settings of Windows 10 and whether or not Windows 10 is more a spy spot than previous versions.  So, you are basically giving away a lot of information in order to benefit from this free upgrade and to benefit from all the new cloud based services provided by Microsoft.

To be honest, the Windows 10 release is a good one.  It’s well designed and fixed all the major issues that were introduced in Windows 8.  But on the other hand, Windows 8.1 was not a bad operating system either and was less intrusive; right ?

So, yes, we admit that Windows 10 is a really nice evolution of previous windows version and we could work with it. On the other hand, we were not really excited by this release as we think windows 10 is really a new relooking of windows 8.1. We understand that there are a lot of new features in it but in enterprise I doubt that Cortana will be really used…

The fact that Windows 10 is moving into the Windows a service concept is understandable but we have problem with all the privacy settings turn on by default on the operating system.

Ubuntu (or any Linux) as alternative ?

Since Microsoft is moving into a Service Provider strategy, there are a lot of changes that does not make all the people happy. We have received a few request from small business customers to provide a possible alternative to Windows 10.  To be honest, this is a really small portion of request. These requests come from people still running Windows Vista and not willing to pay for Windows 10 upgrade.

Some other requests comes from people that have concerns about privacy topics. This part is quite funny because Ubuntu has also got some issues with privacy settings when Lenses have been introduced.

We see that the IT industry is changing the way we will be working in the future.  Online services seems to be the ultimate solution in the future.  Windows 10 is a great operating system but the move to the windows as a service is not pleasing everybody.  The online services model might not fit (yet) certain organizations.

If you have concerns about your privacy, you should tweak the Windows 10 privacy settings to fit your needs and decide what you want to share with Microsoft.

We think that Windows 10 will be a successful deployed Operating system through organizations. However, we also believe that in the future the operating system you will be using will not matter that much.  More and more online services are made OS independent.  A Linux user can use Office 365 services.  This is on what Microsoft is betting in order to still make money. On the other hand, this might give an opportunity to other companies to deploy their own operating system. Wait and See